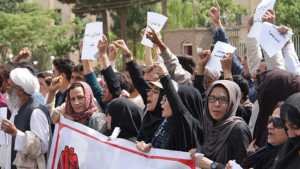 KABUL(AA): An alliance of senior Jihadi figures and parties in Afghanistan have urged Jamiat-e-Islami-backed protesters in Kabul to end their ongoing sit-in camps against the government in light of the country’s critical situation.

Sibghatullah Mujadadi, a spiritual Afghan leader and veteran Jihadi figure, told a gathering of the alliance that the sit-in camps on various busy streets in the capital are bothering people from all walks of life, laypeople and officials alike.

“This is a major sin,” he said, offering his services as mediator between the protesters and the government.

The protests followed last month’s deadly truck bombing in Kabul that killed up to 150 people and left more than 400 wounded. The Jamiat-e-Islami party – the main ally of President Mohammad Ashraf Ghani in the government – in particular has stepped up its pressure on Ghani. Some factions of the protesters are even demanding dissolution of the government, and the establishment of an interim one.

Last week the Hezb-e-Islami party led by Gulbuddin Hekmatyar threw its weight behind the national unity government of President Ashraf Ghani and his Chief Executive Officer Abdullah Abdullah. “Opportunist political elements” among the protesters have also been denounced by the U.S. Embassy and the UN amid escalating violence in the country.