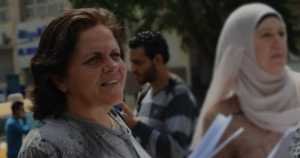 The head of the legal unit for prisoners’ rights group Addameer, Mahmoud Hassan, said that a court session would be held on Wednesday in the Ofer detention center to confirm the sentence.

Israeli forces detained al-Saafin on July 2 in the village of Beituniya in the central occupied West Bank, on the same day as they detained Palestinian Legislative Council member Khalida Jarrar, another prominent feminist and human rights advocate.

The Ofer court extended both al-Saafin and Jarrar’s detentions on Monday in order to search computers that were confiscated in their homes during the detention raids and to give the Israeli prosecution enough time to argue in favor of administrative detention.

The Israeli army said at the time that both detentions were due to the women’s leading roles in the Popular Front for the Liberation of Palestine (PFLP) — a well-known leftist Palestinian party which Israel deems to be a terrorist group.

“We protest the arrest of Palestinian lawmakers and women activists, as well as the ongoing detention of Palestinian political and civil society leaders,” Palestine Liberation Organization (PLO) Executive Committee Member Hanan Ashrawi said following Jarrar and al-Saafin’s detention, adding that “clearly, this political arrest is further proof that the judicial system in Israel has no relation to justice.”

The PFLP meanwhile said that “these attacks will not stop (the PFLP) from continuing its role in resistance to the occupation and confronting the crimes and projects that attempt to liquidate the Palestinian cause.”

According to Addameer, there were 6,200 Palestinians in Israeli prisons as of May, including 56 women, and 490 held in administrative detention.

Israel uses administrative detention almost exclusively against Palestinians. The widely condemned Israeli policy allows for a detainee to be sentenced for up to six-month renewable intervals based on undisclosed evidence.

Although Israeli authorities claim the withholding of evidence during administrative detention is essential for state security concerns, rights groups have instead claimed the policy allows Israeli authorities to hold Palestinians for an indefinite period of time without showing any evidence that could justify their detentions.