The demolitions came with Netanyahu under increasing pressure from right-wing members of his coalition, which holds only a one-seat majority, as clashes have spread in recent days following the murder of four Israelis.

The spike in violence has brought international calls for calm, with concerns the unrest could spin out of control and memories of previous Palestinian uprisings still fresh.

The houses destroyed were the former homes of Ghassan Abu Jamal and Mohammed Jaabis, a military statement said. They were placed under demolition orders after the men attacked Israelis last year.

Armed with meat cleavers and a pistol, Abu Jamal and his cousin Uday Abu Jamal killed four rabbis and a policeman before being shot dead in November 2014.

Jaabis rammed an earthmover into a bus in August 2014, killing an Israeli and wounding several others. He was shot dead by police at the scene. An AFP journalist saw the gutted inside of a house in east Jerusalem that witnesses said was the former residence of Abu Jamal.

Yasser Abdu, 40, a neighbour and friend of the Abu Jamals, accused Israel of a “policy of collective punishment.”

The demolition explosion, which took place before dawn, blew out the interior of the structure but the supporting pillars remained intact, an AFP journalist said.

The blast damaged other apartments in the building as well as surrounding structures.

Eyewitnesses said police and other authorities arrived yesterday at midnight, locking down the area before drilling and planting the explosives. 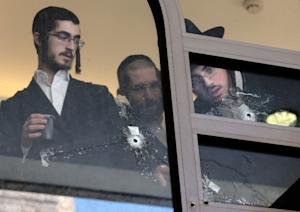 Ultra Orthodox Jews look on November 19, 2014 at bullet holes in the main window of a synagogue in J …

A room was also sealed off at the former home of Muataz Hijazi, who in October 2014 tried to gun down a right-wing Jewish activist, critically wounding him. Hijazi was shot dead the next morning during a police raid.

The demolitions had been challenged in Israel’s top court which ultimately approved them months ago.

The court also approved sealing the room but not demolishing the structure, since Hijazi’s attack “did not ultimately result in the loss of human life.”

The punitive measures come after clashes have spread in east Jerusalem and the occupied West Bank in recent days following the murders of four Israelis, including a Jewish settler couple who were driving with their children in the West Bank. Israeli security forces said Monday that five men they had arrested were members of militant group Hamas and had confessed to shooting the couple.

In the wake of the violence, Netanyahu has announced a series of new security measures and right-wing politicians have urged the demolitions to be brought forward.

“We are not prepared to give immunity to anybody, not to any rioter… or any terrorist, anywhere, and therefore there are no limits on the activities of the security forces,” Netanyahu said ahead of a special session of his security cabinet on Monday night.

Also on Monday, thousands turned out in Jerusalem for a rally outside the prime minister’s residence organised by Jewish settlers urging Netanyahu to come down hard on militants and boost settlement building.

The restrictions had been imposed after two Israelis were stabbed to death there and as Jews wrapped up celebrations for their Sukkot holiday, which ended Monday night.

Worship at the sensitive Al-Aqsa mosque compound will continue to be limited to men aged 50 and above. There is no age limit for women.

Around 300,000 Palestinians live in Israeli-annexed east Jerusalem, where the Old City is located.

Previous articleI Owned The Yesterday, But Have I Lost The Today?
Next articleWho’s Right and Wrong on Syria? – Ramzy Baroud