Iqbal, Jinnah and Muslims of India 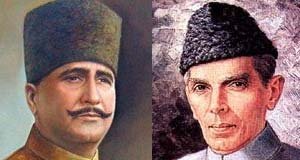 Most of Iqbal’s high sounding exhortations and Jinnah’s promises and logic of a better future have rebounded on Indian Muslims.  In a sense they have become the lost tribe of the subcontinent

The fierce controversy that raged in the minds of the Muslims of India over the issues of Pan-Islamism and nationalism in the decades preceding independence was influenced profoundly by three pre-eminent Muslim leaders of that era, notably Mohammad Iqbal, Mohammad Ali Jinnah and Abul Kalam Azad.

Iqbal and Jinnah were concerned with protection and equal power for Muslims in India from the influence of Hindus, who at that time comprised two-thirds majority in the country.  Abul Kalam Azad on the other hand thought of Pan-Islamism as just a philosophy and believed strongly in Indian nationalism, and the Muslim minority developing goodwill with Hindu majority for their welfare.

It is hard not to credit Iqbal with the seed for the creation of Pakistan.  He did attack the ideology of nationalism primarily with reference to Indian nationalism, but curiously conceded the compatibility of Islam with nationalism in a state where Muslims were a majority of the population. To come to terms with the fact that in India Hindus were in two-third majority, he came up with the concept that the provinces in the west and east where Muslims were a majority, should be an autonomous Islamic region within the federal Indian state; while Muslims in the rest of India be guaranteed one-third representation in the federal Indian structure.  It appears to be a Yugoslavia — like idealistic solution of mixed religious and ethnic realities.  But that experiment in Yugoslavia ultimately failed resulting in a bloody civil war there.
While Iqbal championed Pan-Islamism passionately, curiously he did not support the Khilafat movement and supported Kamal Ataturk’s Turkish nationalism.  He also said that while Muslims transcending their nation states could be politically united, they could not be one nation, vis-a-vis  the Arab Muslims and the Indian Muslims.
In his literary and public career Iqbal had started out as an Indian nationalist and interfaith devotee, who extolled the virtues not only of the nation of Hindustan (India) but also of many Hindu and Sikh religious leaders.
He wrote eulogies praising Guru Nanak and Swami Ram Tirath.  He also wrote praises for the Hindu religious songs calling them  a source of strength for mankind.  His famous verse, “Shanti bhi, shakti bhi bhagton kay geet main haiy” (The songs of Hindu priests are the source of both peace and strength) reaffirms his then belief.

However, he soon became a fervent and devoted admirer of everything Islamic and pronounced that the primary goal of Indian Muslims should be to re-build a glorious Islamic nation in their land.  He became a prominent leader in the Muslim League, the political party of the Muslims of India.  In  the 1930 national convention of Muslim League in Allahabad, he was among the first prominent Muslim leaders to make the proposal that the Muslims of India be given a nation of their own.

Iqbal struggled with the realities of the Muslim community in India; their population was only one-third in India and they did not have that much in common with either Arab or Irani or Turkish Muslims.  India was their homeland.  In the last ten years of his life he found it difficult to bridge his passion for a glorious Indian Muslim nation with his earlier passion for the Indian nation.  He could not explain that if India was, “Saarey jahan say accha Hindostan hmaara” (India is the best nation on earth),  why should Indian Muslims form a separate nation of their own.

Jinnah on the other hand was not burdened with idealism and philosophy and wanted a homeland for the Muslims of India on the ground that they constituted a distinct nation from the majority Hindus.  He did regard Islam as a basis for the separate nation state of Pakistan.  Thus while claiming Punjab as a part of Pakistan he disavowed the heritage of Guru Nanak and Swami Ram Tirath as the heritage of the Pakistani Punjab.  Jinnah disagreed with Iqbal’s advice to not involve Muslims living in Hindu majority provinces in the Pakistan movement.  He proceeded to involve Muslims of UP and Bihar and the Aligarh Muslim University, who had not even a ghost of a chance to be a part of the new Muslim homeland into the vociferous Pakistan movement.

An entire generation of educated Muslims in pre-independence India had grown up on the staple diet of Iqbal’s ideas and verses of the supremacy of Islam over others.  His exhortation to Muslims in the name of Islam was also to shore up the confidence of the Muslim community that was beset with low confidence in the midst of the steadily progressing Hindu majority.  Yet, neither Iqbal nor his ardent Muslim followers could figure out exactly how in the face of the very difficult reality they could regain the lost glory of the Indian Muslim nation.

It was in these circumstances that Jinnah, earlier an avid secular Indian nationalist, got disillusioned with the politics of the Indian National Congress party.  Congress party even though it represented Indians of all faiths, yet the majority of them were Hindu, and hence the party had a significant Hindu cultural strain.  Indeed when Congress party won the 1936-37 provincial elections held in 11 major provinces from a mixed electorate, and formed  government in several provinces that lasted two years, it adopted relatively more of the Hindu cultural elements than Muslim cultural elements in public institutions.  For instance, it called public schools built under its rule as “vidyalas” rather than “maktab”; social centers were called “Ashram” rather than “khanqah”.

Muslim League and Jinnah sensed in that situation a fear that in independent India Muslims will have to play second fiddle to Hindus, and will not have real equal power sharing status. That led to Jinnah and Muslim League propounding the two nation theory that, Muslims and Hindus were two separate nations in one country.  They demanded that Muslims of India be given a separate homeland of theirs, by bringing together all provinces where Muslim population was in majority, so that their rights were not compromised.  Jinnah pledged to the Muslims living in Hindu majority provinces that by migrating to Pakistan they will have an equal future along with other Muslims.  In fact he exhorted them to come build a new and powerful Islamic country in their adopted land.  He gave them his own example of being from a Hindu majority province yet leading the new Islamic nation.

As things have played out 66 years later, the consequences for the Muslims of India can only be described as a disappointment.  The breakup of Pakistan in two parts in 1971 was a blow to the psyche and confidence level of the Muslims of India. They saw the half- a- century old vision of the return of Muslim glory in the subcontinent shattering in-front of their own eyes.  Like the holy grail, regaining glory in the subcontinent has eluded them.

Most of the glorious historical monuments and cultural  icons of the 600-year long Muslim rule are not in Pakistan or Bangladesh.  For most Muslims in the many Hindu majority provinces that are today’s India, the consequences are an unending suspicion of their fellow Hindu citizens concerning their national loyalty.  Most of Iqbal’s high sounding exhortations and Jinnah’s promises and logic of a better future have rebounded on them.  In a sense they have become the lost tribe of the subcontinent.

Today the territorial component is as important as religion in the two nation states flanking India.  Even today it is not inaccurate to say that despite the bloodshed, violence, tension and rhetoric, the two Islamic states of Pakistan and Bangladesh have more in common with India than the Muslim countries of Middle East.  It is this vision of a glorious subcontinent-nation, that Iqbal had told us in his earlier years when he was not fired up with Islamism, as the best nation on earth.  Poetic and imaginary indeed.  But life is neither poetry nor imagination.