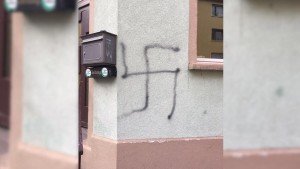 BERLIN (AA): A mosque in Germany’s southwestern city of Freiburg has been targeted by vandals on Tuesday night, who spray painted Nazi symbols on the walls of the mosque.

Ziya Celik, the head of the “Islamic Centrum Freiburg” mosque association told Anadolu Agency on Wednesday that they were worried over growing number of hate crimes targeting mosques and Muslims in recent years.

“We condemn this xenophobic act,” he said, adding that they suspect far-right groups were behind this attack.

Germany has witnessed growing Islamophobia and anti-migrant hate in recent years, triggered by the propaganda of far-right and populist parties, which have exploited fears of the refugee crisis.

In 2016, 91 mosques were attacked across Germany, which showed a significant increase in anti-Muslim violence. In 2015, 75 such attacks were reported, and in 2014 there were nearly 60 attacks that targeted mosques.

Germany, a country of 81.8 million people, has the second-largest Muslim population in Western Europe after France. Among the four million Muslims in Germany, three million are of Turkish origin.