DUBAI (Al Arabia News): Fire broke out Thursday in an upscale hotel near Dubai’s massive New Year’s Eve fireworks display, where hundreds of thousands of people are gathered for celebrations.

Dubai media office said in a statement there one person had died of a stroke and fourteen had minor injuries from a resulting stampede.  It added that 90 percent of the blaze at the Address Hotel Downtown was under control.

Four teams of firefighters are attempting to put out the blaze. The media office of Dubai government said in a statement that the blaze was “external.” There are reports that the fire could have come from the building’s large terrace area several storeys up.

The fire started on the 20th floor of the building and then spread, Civil Defense said.

At least one helicopter could be seen circling the 63 storey tower.

Kitchen staff in one of the Address Hotel’s restaurants said they had run away after hearing the building’s alarms going off.

An Al Arabiya reporter around 500 meters from the scene said that the fire was still growing, and that a burst of flame and smoke could at one point be seen about 9 floors up the tower.

A 23-year Lebanese resident, who declined to give her name, told Al Arabiya that at 9:30 she had been walking on the boulevard which runs along the hotel and heard ambulance sirens, and people running and screaming.

The fire was between 50 to 80 meters in length, Al Arabiya’s correspondent added. 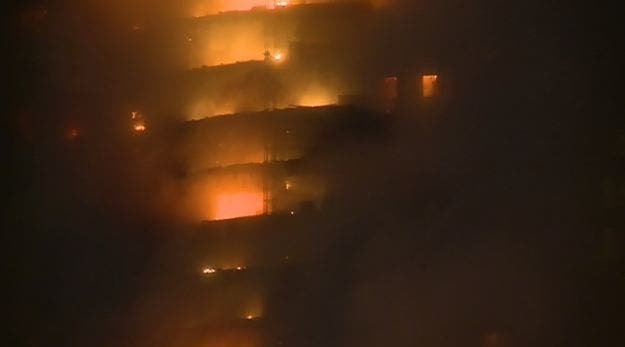 It was not immediately clear what caused the fire, which ran up at least 20 stories of the building near the Burj Khalifa, the world’s tallest skyscraper at 828 meters.

Another Al Arabiya correspondent near the scene, spoke to some security guards at the scene said that everybody in the tower had been evacuated.

The massive clouds of smoke near the fire also obscured the view of some of the surrounding buildings.

Burning debris rained down from the building as firetrucks raced to the scene. It was not immediately clear if anyone was wounded in the blaze.

Dubai’s media office said about one hour after the fire started that the fireworks celebration would go on as planned.  The show will begin at the Burj Khalifa, which organizers said was fitted with 400,000 LED lights. They said 1.6 tons of fireworks would be used in the display.