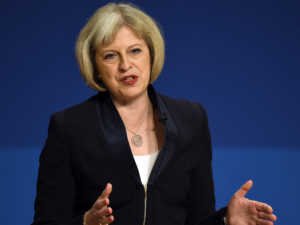 His social justice manifesto calls for an economy working for everyone, not just privileged Brits like now.

It advocates improved worker rights, a national education service, social security for pensioners, dignity for Brits unable to work, secure homes, help for the homeless, healthcare for all the way it used to be, safer communities, real democracy, equity for everyone, and more.

UK elections weren’t due until May 7, 2020. In mid-April, with a seemingly unbeatable 24-point lead over Labour in polls, May called for June 8 snap elections, seeking a stronger mandate to pursue her agenda.

Days ahead of voting, her strategy appears to have backfired. Labour narrowed her lead significantly to 3% in a You Gov poll – with 42% support compared to Labour’s 39%.

You Gov’s constituency-by-constituency polling result shows Tories losing 20 seats next Thursday, Labour gaining up to 30 – resulting in a hung parliament, Tories around 16 seats short of a majority.

May’s support plunged after the poor reception her party’s manifesto got, polar opposite Labour’s, including plans for elderly Brits to pay home care costs the first time – the largest stealth tax in UK history, according to some observers.

As of May 31, according to You Gov, Tories are expected to win 310 seats, Labour 257, the Scottish National Party 50, Northern Ireland parties 18, Liberal Democrats 10, Plaid Cymru 3, Green 1, and Other 1, UK Independence Party (UKIP) none – 326 seats needed for a majority, otherwise coalition governance is needed.

Given variations in projections, You Gov explained Tories could end up better or worse on election day. If things go badly for May, she could be replaced as prime minister for waging a losing campaign.

She refused to participate in last Thursday’s BBC leaders’ debate. Corbyn issued a statement, saying “(t)he Tories have been conducting a stage-managed arm’s length campaign and have treated the public with contempt.”

“Refusing to join me in Cambridge tonight would be another sign of Theresa May’s weakness, not strength.”

“It’s very regrettable the prime minister wouldn’t debate with Jeremy and, after tonight, I can see why.”

“She has no answers to the issues that really concern people on the doorstep, the NHS and cuts facing our schools, and far from appearing strong and stable, she was definitely on the back foot answering most of the questions pitched to her.”

May’s approval rating hit a new low – 50% of Brits dissatisfied with her leadership, only 43% satisfied. In the past month, Corbyn gained 23 points.

UKIP leader Nigel Farage calls May the Tory’s “biggest liability…It’s quite tough to believe anything she says,” he stressed.

Days ahead of June 8 snap elections, she’s still favored to remain prime minister. Yet a bad showing with a hung parliament makes her a loser, weakening her authority, undermining it if she’s challenged and replaced as party leader.

Stephen Lendman lives in Chicago. He can be reached at [email protected]

His new book as editor and contributor is titled “Flashpoint in Ukraine: How the US Drive for Hegemony Risks WW III.”