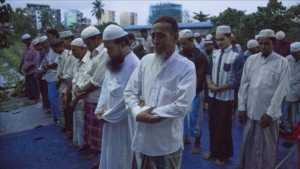 YANGON, Myanmar (AA): A leading human rights group on Monday called on Myanmar to move immediately to protect Muslims facing threats to their rights to free exercise of religion.

Police are charging three Muslim men who last week organized a street prayer in Myanmar’s largest city, Yangon, to protest the closure of two religious schools, reducing the number of places of worship for Muslims during the holy month of Ramadan. Local administrative authorities also warned Muslims not to hold such prayers, claiming they threaten stability and the rule of law.

On Monday, Human Rights Watch in a statement called these moves “further evidence of the government’s failure to protect religious freedoms of minority groups in Myanmar.”

“These actions by local officials are an outrage that should be urgently overruled by senior leaders in the General Administration Department, or failing that, the Minister of Home Affairs,” said Phil Robertson, Asia director of the New York-based group.

He added that Aung San Suu Kyi, Myanmar’s de facto leader, should step in to protect freedom of conscience and religion if the military-controlled Home Affairs Ministry fails to do so.

“Religious believers should not be threatened or criminally charged simply for exercising their fundamental right to observe and practice their religion,” he said.

Muslim residents of Meikhtila, a small town in the central Mandalay region which saw anti-Muslim violence in 2013, are facing similar challenges, local media reported on Sunday.

According the Voice newspaper, local authorities have barred Muslims from holding Ramadan prayer in three places in the Thiri Mingalar quarter, saying gathering in such non-religious buildings such as houses is illegal and could cause problems.

Four years on, only five of 13 mosques closed by authorities in 2013 have been reopened, the paper said.

HRW urged the government to revoke discriminatory laws that are frequently applied to minority religious communities.

“Obscure, discriminatory regulations used to prevent the construction or repair of religious structures, such as mosques and Christian churches, should be rescinded immediately,” said Robertson.

“Daw Aung San Suu Kyi and the NLD-led government should realize the world is watching how they handle this extremely worrisome situation, and will not accept excuses or inaction.”