There’s palpable fear in Official Washington whenever anyone dares suggest holding Israel accountable for its crimes against the Palestinians. Instead there’s a rush to make excuses and to deny reality, a pattern challenged by a book by Max Blumenthal

[dropcap]M[/dropcap]ax Blumenthal’s latest book, The 51 Day War: Ruin and Resistance in Gaza, tells a powerful story powerfully well. I can think of a few other terms that accurately characterize the 2014 Israeli assault on Gaza in addition to “war.” Among them are “occupation,” “murder-spree” and “genocide.” Each serves a different valuable purpose. Each is correct. Israeli Prime Minister Benjamin Netanyahu meeting with his generals to discuss the offensive in Gaza in 2014. (Israeli government photo)

Yes, of course, Israel ultimately wants Gaza’s land incorporated into Israel, but not with non-Jewish people living on it. (Eighty percent of Gaza’s residents are refugees from Israel, families ethnically cleansed in 1947-1948.)

Yes, of course, Israel wants the fossil fuels off the Gazan coast. But it already has them. No, the immediate goal of the Israeli war on Gaza last year, like the one two years before, and like the one four years before that, would perfectly fit a name like “The 51 Day Genocide.” The purpose was to kill. The end was nothing other than the means. 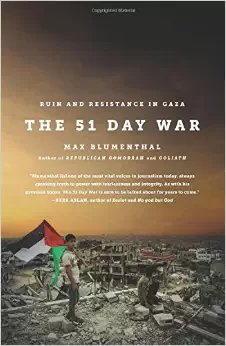 In 2014, as in 2012 and 2008, Israel again attacked the people of Gaza, using weapons provided for free by the U.S. government, which could be counted on, even standing completely alone, to defend Israel’s crimes at the United Nations. Practicing what’s been called the Dahiya Doctrine, Israel’s policy was one of collective punishment.

The stories in the U.S. media focused on Israelis’ fears. The deaths of Gazans were explained as intentional sacrifices by a people with a “culture of martyrdom” who sometimes choose to die because it makes good video footage. After all, Israel was phoning people’s houses and giving them five-minute warnings before blowing them up. The fact that it was also blowing up shelters and hospitals they might flee to was glossed over or explained as somehow involving military targets.

But the Israeli media and internet were full of open advocacy by top Israeli officials of genocide. On Aug. 1, 2014, the Deputy Speaker of Israel’s Parliament posted on his Facebook page a plan for the complete elimination of the Gazan people using concentration camps, to take one of dozens of examples.

And the whole thing was kicked off when Prime Minister Benjamin Netanyahu lied that three murder victims might be still alive, falsely blamed their kidnapping on Hamas, and began raiding houses and mass-arresting Gazans. Once Israel and the United States had rejected out-of-hand quite reasonable ceasefire demands from Hamas, the war/genocide was on for 51 days — with great popular support in Israel. Some 2,200 Gazan people were killed, over 10,000 injured, and 100,000 made homeless by a very one-sided “war.”

Here’s a taste of how Blumenthal describes what happened:

“The two Red Crescent volunteers told me they later found a man in Khuza’a with rigor mortis, holding both hands over his head in surrender, his body filled with bullets. Deeper in the town, they discovered an entire family so badly decomposed they had to be shoveled with a bulldozer into a mass grave. In a field on the other side of town, Awad and Alkusofi found a shell-shocked woman at least eighty years of age hiding in a chicken coop. She had taken shelter there for nine days during the siege, living off of nothing but chicken feed and rain water.”

While every bombed school and hospital was explained with the assertion that Gazan fighters were hiding among “human shields,” we meet Gazan people in Blumenthal’s book who were literally held up as shields by Israeli soldiers who shot at Gazans from over their shoulders. People also had new nasty weapons tested on them, including Dense Inert Metal Explosives (DIME).

The people of Israel generally went along with this war (with many admirable exceptions), and later reelected its architects. Protests against the war were banned, and various lies (including those about the three murder victims that kicked it all off) were exposed in a matter of days or weeks. No matter, the point was to kill people, and people were killed. And no matter in Washington, either, which kept the weapons flowing, quite illegally.

Gaza launched some 4,000 rockets into Israel, to little apparent effect — rockets whose total combined payload roughly equaled that of just 12 of the missiles Israel was sending into Gaza from its F-16s courtesy of the Land of the Free.

The “international community” gathered in Cairo on Oct. 12, and diplomats “discussed the destruction of Gaza as though it were the result of a natural disaster — as though the missiles that reduced the strip’s border areas to rubble were meteors that descended from outer space.”

There was no way to discuss damage to both sides in a manner that would make Israel’s actions seem legitimate, even by the standards of the “international community,” so they discussed the one-sided damage as if nobody were responsible.

Is this where the United States is headed culturally and with its own wars? One reason to hope not is that opposing Israel’s wars is one of the few places where U.S. youth are engaged in antiwar activism. Nonetheless, there is reason for concern. The U.S. has followed the Israeli model of domestic policing, of drone use, of assassination, and of propaganda, and the Israeli lead in relation to Iraq, Syria and Iran.

David Swanson is an author, activist, journalist, and radio host. He is director of WorldBeyondWar.org and campaign coordinator for RootsAction.org. He blogs at DavidSwanson.org