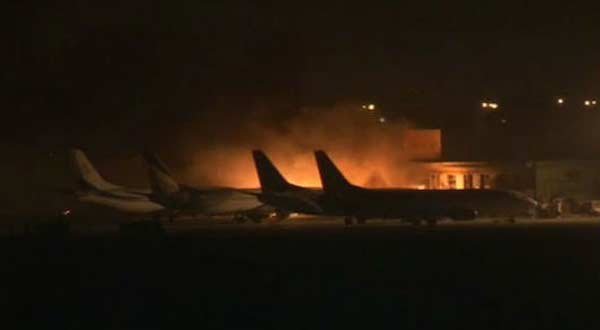 ISLAMABAD – At least 28 people, including 10 terrorists, were killed at Pakistan’s Jinnah International Airport in Karachi after it came under attack Sunday night, a leading Pakistani daily reported.

The entire airport has been cleared and all terrorists have been killed, a Pakistan Army spokesperson was quoted as saying by The Dawn.

He said that weapons and live ammunition were recovered from the terrorists, adding that they were wearing large packs on their bodies.

At least 18 security personnel were also injured in the attack who were shifted to Abbasi Shaheed Hospital.

According to a statement by the spokesperson of the Prime Minister House, the militants entered the airport from a terminal used for cargo and special VIP operations at about 11:20 p.m.

The heavily armed assailants used forged ID cards of Airport Security Force (ASF), according to The Dawn. The attackers then engaged with security forces in a fierce gunbattle that lasted for hours.

The attackers also set an oil terminal and a building on fire.

The airport fire was put out by fire fighters who said that 30 vehicles were involved in the operation.

Army troops were called in to deal with the situation and all the routes to the airport were sealed.

Huge explosions were heard during the attack as intermittent firing took place at the airport. Large plumes of smoke were seen over the cargo terminal, the daily reported.

A hand grenade attack was also carried out on the Isphani Hanger.

“No damage to aircraft, fire visible in pics was not plane but a building, now extinguished. All vital assets intact,” Bajwa tweeted.

Earlier, the media reported that the militants set two airplanes including cargo plane of a foreign company on fire and partially damaged four others by firing at them.

Suicide bombers were reportedly part of the terrorist squad that had infiltrated the airport.

All flight operations at the airport have been suspended and flights have been diverted to other cities.

Previous articleSISI VOWS TO “CORRECT MISTAKES OF THE PAST”
Next articleWill India Have Its Own World Media On Modi’s Watch?