Spotlight on Egypt and Syria 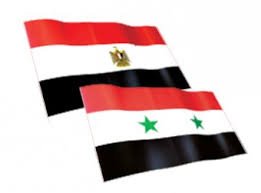 The Levantine Cultural Center in Los Angeles presented and co sponsored last week an informative address on the subject of the Arab uprisings, popularly known as the Arab Spring. The specific focus was a discussion of the contrasts between Syria and Egypt as their uprisings played out on the international scene. The event was also sponsored by LA Jews for Peace and Friends of Sabeel-North America

Ziad Abu Rish, a Middle East scholar, was the speaker. Mr Abu Rish is a PhD candidate in the History Department of the University of California in Los Angeles (UCLA). He serves as the Graduate Student representative to the Board of Directors of the Middle East Students Association. This event was part of a series of public conversations about the Middle East held under the auspices of the Levantine Cultural Center.

Mr Abu Rish recently returned from a three months study visit to Lebanon in which he researched that nation during the thirties and the forties. He explained to his audience the different paths – or trajectories – taken by the uprisings in Egypt and Syria. How does one explain – he posed – that Egyptian dictator Hosni Mubarak was forced to leave office some 18 days after the Arab Spring began in Egypt. And, further, while there were continuous and well attended demonstrations, they were for the most part non-violent.

Yet Bashar Assad in Syria has experienced a two year Arab uprising with protests escalating into violence on his part and on the part of the opposition. And, he remains in power.

At the time of the onset of the Arab Spring both Egypt and Syria had in common that they were both ruled by dictators and both had economic models that favored the rich and elite. Now Mr Abu Rish brought into focus his first factor in contrasting the two nations: regime cohesion, that is the degree to which they are internally cohesive. He reminded his audience that it was the Egyptian army that told Mubarak it was time for him to leave. They understood that if Mubarak did not go then, the army would go down with him. The regime was decapitated – the body remained.

In Syria, in the upper echelons of government, there is more regime cohesion. In Syria the defections were mid or lower level people. The upper echelons act as a unified body, and the regime stayed in power.

In Egypt there was little regime cohesion. In Syria there was a great deal.

Another factor given by Mr Abu Rish was social diversity – the diversity of the population. Differences make collective action more difficult. In Egypt it was a lot easier to form a unified front. In Egypt you had a series of protests that created a de facto protest model.

Contrary to popular perception, authoritarian regimes are not truly one man operations. The dictator must form alliances. In Syria and Egypt the alliances with workers have shifted to alliances with business. In Egypt it was the nation’s top business leader who called for Mubarak’s ouster. In Syria the business community did not call for the ouster of Assad. In Egypt the Coptic Christians had a troubled relationship with Mubarak. In Syria the Christians had and have a much better relationship with Assad, and in any event, they are afraid of what would follow if Assad were ousted.

The final issue to factor in whilst contrasting the Arab Spring in Egypt and Syria is strategic importance.

In Syria you have a regime in opposition to the United States and Israel and to the Gulf monarchies. The loss of Syria would give us a shift in the balance of power.

Mr. Abu Rish said at the outset of his address that it would be short and that he would focus on questions the audience had.

During a lively question and answer period, Mr. Abu Rish reiterated that Syria was not truly about oil (which a number of audience members had suggested).

“Syria is a battle for regional supremacy. Its more than oil”. The focus is an attempt to reshape the Middle East.

In response to another query, Mr. Abu Rish addressed the concern of Lebanon that Syrian refugees would come into Lebanon in large numbers. Actually, he reminded his audience, in 2006 during Israel’s brutal war with Lebanon, a large number of refugees spread to Syria from embattled Lebanon.

The audience applauded Mr. Abu Rish and thanked him for his appearance. The Levantine Cultural Center is an independent not-for-profit organization that presents the arts and cultures of the Middle East and North Africa. The subjects of presentation by the Center encompass areas from Morocco in the west to Afghanistan in the east.

La Jews for Peace is a group of Jewish Americans committed to peace in the Middle East through a negotiated settlement to the Israeli-Palestinian conflict, an end of the Israeli occupation of Palestinian lands, and opposition to American militarism, imperialism, and exceptionalism.  As Americans we feel our first duty is to assure that our government, the United States, acts honorably in dealings with states in the Middle East and around the world.

Friends of Sabeel—North America (FOSNA) is a non-profit, tax-exempt Christian ecumenical organization seeking justice and peace in the Holy Land through non-violence and education. Sabeel is an international peace movement. FOSNA works in the United States and Canada with the support of churches and holds co sponsored educational conferences held regionally; alternative pilgrimages, and gatherings from all nations in the Holy Land.–TMO