Readying for the Red Planet? 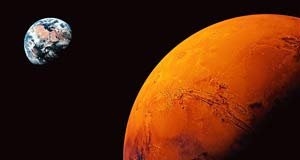 If there are thousands of suns in numerous galaxies, it is natural to assume there are at least a hundred earths rolling out there

As the PSLV blasted off in outer space from Sriharikota off Andhra Pradesh coast in India carrying the satellite Mangalyaan, at precisely 2.38pm on November 5th, a wave of applause rent the rarefied air at the SHAR centre, and a tsunami of pride swelled in every Indian heart across the world.

This was India’s day in the sun – the day nothing could go wrong… and it didn’t. ‘A perfect text-book launch’, as they call it. 44 minutes later, the satellite was placed in earth’s orbit, to begin a nine-month long journey to the Red Planet.

Prime Minister Manmohan Singh announced the Mars Mission from the ramparts of the Red Fort on India’s Independence Day this year. The country had long known that this mission was being planned but that it would materialize so soon was indeed a surprise.

However, after the applause died down, some questions began to be raised, like – is the mission really necessary? Couldn’t the resources have been more wisely spent? What is it really going to achieve etc etc? Those questions will remain, which don’t really elicit answers because there is no either/or situation in such cases. Similar questions were raised during the moon mission, but nobody remembers them now because of the mission’s success.

While comparisons with other space missions will remain a constant exercise, given that the future realm of multi-national competition is in outer space, what is most unique about Mangalyaan is its cost-efficiency. At Rs460 crore, the entire mission is just one-third of the cost of a single Dreamliner aircraft (Rs1,300 crore). But the real success of the mission – if all goes well – will be visible only after 10 months, when Mangalyaan begins streaming images and data of the red planet on to our computer and TV screens.

While scientists and experts will have much to study and research–and sceptics will always have much to question–what interests the layperson – irrespective of any mission’s success or failure – will be two questions that have dogged us for centuries. The first is: ‘ARE WE ALONE?’ The answer to this will continue to elude us for several missions more, and may not be found at least until my lifetime – but may be in my children’s. But it is a tantalising thought that has excited scientists, artists, writers, philosophers, filmmakers, teachers, and even businessmen (what else is the one-way ticket to Mars for?)

While the wonders of space have inspired sci-fic writers and filmmakers to venture beyond the comfortable confines of day-to-day concerns, most interesting is the philosopher’s query and the rationalist’s doubt, which brings us to the second crucial question: ‘Does God exist?’

A meaningless one for the thousands of believers – which includes top scientists – this will, however, remain with us till eternity. Because in every human’s mind (believers included), this fundamental doubt – the reason for our existential angst – will continue to haunt us until it’s time to say ‘goodbye Mother Earth’.

First, let’s come to the first question – Are We Alone? For ages, we have tried to discover life in outer space on other planets, without much success. We never believed the Moon could support life even before Man landed on the lunar surface.

That’s because though the full moon looks beautiful, and so does the 14th night (Chaudvin ka Chand), it has neither atmosphere nor gravity. Mars was the only planet we believed could support some form of life until that bubble too burst. The other planets were too far from or too near to the Sun. Earth was the perfect distance, and it looked stunning from space (with India looking the best – Saare jahan se accha!).

However, hope springs eternal in the human breast, and our vast universe provided ample hope to our scientists and fiction writers. In the humongous, ever-expanding universe, is it possible to believe that even bacteria don’t exist, what to talk of short and green, rampaging Martians? If there are thousands of Suns in numerous galaxies, it is natural to assume there are at least a hundred Earths rolling out there. And none of them support life? That’s hard to fathom… maybe because it’s not true!

So, wow! There are people like us out there of whom we know absolutely nothing …and neither do they (are they sending us any signals?) But even if we do discover in the future that there are creatures similar or dissimilar to us, how are we going to contact them? We may develop ultra-sophisticated, inter-planetary or inter-galactic communication equipment through which we may send or receive signals, and then safely assume some life exists – not just any life, but advanced life. Fine, but can we ever see them? Sure, with the same equipment, why not? But can we ever meet them?

That’s where we hit a black hole. Is it possible for either us or them to travel hundreds of light years away to actually say: “Hello, how do you do, dude?” To even teleport yourself within a few days, you have to travel faster than light in an ultra-light spaceship (can you squeeze yourself in that? Adjust kar lo, yaar! Thode dinon ka to safar hai!)

The genius Stephen Hawking has mulled upon this in his books. In The Theory of Everything, he asks precisely these questions. And one by one, comes to the conclusion that we may simply not exist by the time all this – even remotely – can happen. Now, will the one-way Mars trip of over-enthusiastic earthlings happen in less than 10 years from now? Seems impossible… but great to earn billions of dollars from the Super-Rich!

So, that brings us to the other more fundamental question – something you really can’t help wondering while looking at the skies on a clear, starry night: Does God Exist? Where is He? In this mind-boggling universe, is God omnipresent, omnipotent, omniscient (all-present, all-powerful, all-knowing?) Can our small minds even vaguely imagine that this ‘vishaal brahmand’ (infinite universe) can evolve and grow absolutely on its own, with nobody to give it the Grand, Supreme Direction?

Man! You are just too small and insignificant to even conceive any such idea. So, who knows what exists and what doesn’t? All we know is this sansar is a maya-jaal (the world is an illusion). But we revel in the petty things of life – money, fame, power, physical pleasures, and what have you?

Good intellectual exercise for the weekend. But I have a power-point presentation on Monday morning that may secure me a promotion (now, don’t take this seriously!). So, goodbye Universe, and Hello Office Office!