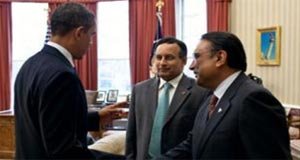 WASHINGTON, Nov 7, 2013: Both the international and Pakistani media are extensively reporting about the content of a so-called ‘secret letter’ purportedly written by President Obama to the then Pakistani President, Asif Ali Zardari.  According to a claim made by the former Pakistani Ambassador to the US, Mr. Husain Haqqani in his new book released yesterday, the US President in this letter had offered to ‘mediate’ between Pakistan and India on Kashmir.

Below is a story published today by the Indian news portal, Rediff.com about this ‘secret letter’ :

“US President Barack Obama secretly offered Pakistan in 2009 that he would nudge India towards negotiations on Kashmir in lieu of ending support to terrorist groups like Lashkar-e-Taiba and Taliban, but much to his disappointment Islamabad rejected the offer. 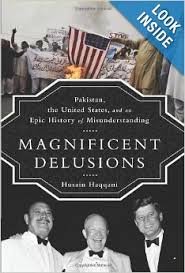 “Since the 1950s Pakistan had wanted an American role in South Asia. Now it was being offered one. In the end, Pakistan would have to negotiate the Kashmir issue directly with India. But at least now the American president was saying that he would nudge the Indians toward those negotiations,” Pakistan’s former Ambassador to the US Husain Haqqani writes in his book ‘Magnificent Delusions’, which hit the stores today. This is Haqqani’s interpretation of the secret letter written by President Obama to the then President Asif Ali Zardari, which was personally hand delivered by his then National Security Advisor Gen (rtd) James Jones.

The letter’s content is for the first time being disclosed by Haqqani, the then Pakistan’s envoy to the US.

In his book, spread over 300 pages, Haqqani writes that in November 2009, Jones travelled to Islamabad to hand deliver a letter written by Obama to Zardari.

Dated November 11, 2009, through the letter Obama offered Pakistan to become America’s “long-term strategic” partner. The letter “even hinted at addressing Pakistan’s oft-stated desire for a settlement of the Kashmir dispute,” he writes.

“Obama wrote that the United States would tell countries of the region that ‘the old ways of doing business are no longer acceptable’. He acknowledged that some countries – a reference to India – had used ‘unresolved disputes to leave open bilateral wounds for years or decades. They must find ways to come together’,” Haqqani writes.

“But in an allusion to Pakistan, he (Obama) said, ‘Some countries have turned to proxy groups to do their fighting instead of choosing a path of peace and security. The tolerance or support of such proxies cannot continue’,” the former diplomat writes quoting from the letter.
“I am committed to working with your government to ensure the security of the Pakistani state and to address threats to your security in a constructive way,” the book says, citing Obama’s letter to Zardari.

“He (Obama) asked for cooperation in defeating Al Qaeda, Tehrik-e-Taliban Pakistan, Lashkar-e-Taiba, the Haqqani network, the Afghan Taliban and the assorted other militant groups that threaten security.

Obama then wrote of his ‘vision for South Asia’, which involved ‘new patterns of cooperation between and among India, Afghanistan and Pakistan to counter those who seek to create permanent tension and conflict on the subcontinent’,” Haqqani wrote.

Previous articleThis is Some Unity, Some Yatra!
Next articleAnimals Are People Too, Or So They Tell Me