LONDON — Muslims around the world have strongly condemned Monday night’s suicide attack in Manchester in which twenty two people were killed and several injured.

The attack was carried by a Manchester born Salman Ramadan Abedi, 22, of Libyan descent.

Muslims in Britain have raised thousands of pounds for the victims. 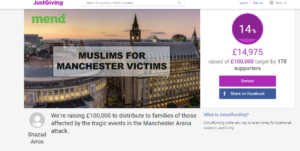 Dr Shazad Amin, CEO of MEND told the Independent: “It is a fundamental part of our faith to help those in need irrespective of their background.

“The Muslim community stands shoulder to shoulder with victims (and their families) of these atrocities.” Dr Amin said adding that MEND would commission a local law firm to distribute the money.

The British Muslim Heritage Centre (BMHC) and the Islamic Society of Britain (ISB) have raised £2,998 and have announced that it will collect donations until next 26 days. 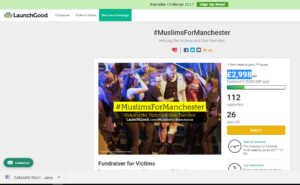 “Though this is a Muslim-led campaign, we welcome our friends of other faiths and none to also contribute. We ask particularly that British Muslims, mosques, Imams, leaders, and groups endorse and promote this initiative.” States the the fundraising page.

As could be expected Islamophobes and mischief mongers, who are always on the lookout for opportunities of such despicable acts of people calling themselves Muslims, are busy in inciting attacks on Muslims.

“Muslim leaders in Manchester have expressed concern about a number of Islamophobic incidents in the city, from verbal abuse to criminal damage to mosques.” Guardian has reported.

A mosque in Oldham was reportedly attacked by arsonists shortly after the Manchester attack.

However, many non Muslims and media reports have praised the contribution and cooperation of Muslim doctors who volunteered to attend the patients during off-duty hours and Muslim taxi drivers who ferried the injured and other passengers free of cost to their destinations.

The barbaric attack has been widely condemned by Muslims within and outside UK.

In Britain the umbrella body Muslim Council of Britain (MCB) has called the Manchester attack “horrific” and “criminal”.

MCB’s  Secretary General Harun Khan said: “May the perpetrators face the full weight of justice both in this life and the next.

“I pay tribute to the police and emergency services who have worked valiantly to save lives last night.”

Saudi Arabia and many other Muslim countries have also condemned the attack. Saudi Government has condemned the attacks as cowardly. Arab News quoted a spokesman of the Saudi Home Ministry saying, “Our thoughts and prayers are with the victims and their families. We continue to stand united with the UK in the global fight against terrorism.”

In India President of Jamaa’t-e-Islami Hind Maulana Syed Jalaluddin Umari said, “We strongly condemn the killing of innocent young people of Manchester. There cannot be any justification for such barbarity. This is clearly inhuman and deserves absolute and unequivocal denunciation. The perpetrators must be brought to book and awarded harshest punishment.”

He stressed, “Islam prohibits wrongful murder of even one person leave aside the mass murder of innocent citizens. Islam calls for protection of human life. The cruelty shown at the Manchester Arena or killing of innocents anywhere in the world is utterly deplorable and highly condemnable”

Expressing his, “Profound sadness and shock of the Indian Muslim community” Kaleem Kawaja, the Executive Director of the Association said, “”Even though this individual had no connection with Indian Muslims or India, yet since he was a Muslim we feel special remorse and grief.  We convey our deepest sympathy to the families of the victims.  May God give them peace and enable them to sustain their terrible loss.”

He added, “It is simply horrible that ISIS who are a bunch of thugs and bloody murderers are exploiting the name of Islam, a religion that categorically forbids any violence against civilians and outside of combat operations.  We pray for the souls of the dead victims and appeal to all, especially Muslims, to pray for them.

“We also pray that Allah bring His curse on the ISIS thugs and those who perpetrate such insane violence in the name of Islam, and cleanse the earth from them.”