Most Israelis support strike on Iran 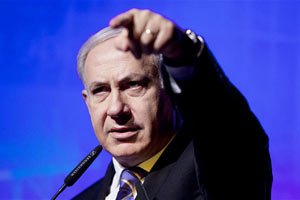 OCCUPIED JERUSALEM – Forget what the world community thinks of the signs of thaw between the United States and Iran and the first telephonic conversation last week between US President Barack Obama and Iran’s new leader Hassan Rouhani since the two countries fell out in 1979.  If anew opinion poll is to be believed, most Israelis want their leadership to teach the Islamic republic a lesson.  Majority of Israelis would support unilateral military action against Iran, according to a poll published on Friday after Prime Minister Benjamin Netanyahu said his government was ready to act alone.

Some 65.6 per cent of 500 Jewish Israelis surveyed by the pro-government Israel HaYom newspaper said they would support military strikes to halt Iran’s nuclear programme, and 84 per cent believed the Islamic republic had no intention of reining in its alleged drive to build a bomb.Israel and many Western countries accuse Tehran of trying to develop a nuclear warhead, a charge Iran denies.

Netanyahu in a speech to the UN General Assembly on Tuesday said Israel was ready to act alone to stop Iran making a bomb, in a warning against rushing into deals with Tehran’s new leaders.

“Israel will not allow Iran to get nuclear weapons. If Israel is forced to stand alone, Israel will stand alone,” Netanyahu told a UN summit, in an attack on overtures made by Iran’s President Hassan Rouhani.

Israel has repeatedly advocated military force and has threatened unilateral strikes against the Islamic republic.

A nuclear-armed Iran would be a bigger threat than North Korea, Netanyahu added, in an alarmist speech designed to counter Rouhani’s recent diplomatic offensive, which has included a direct phone call with US President Barack Obama.

North Korea, which like Iran faces wide-ranging UN sanctions over its nuclear programme, is believed to have several nuclear bombs and to have shared technology with Iran.

Some 51.4 per cent of respondents in the HaYom survey said Netanyahu had given a “good speech” at the UN, with only 10.9 per cent disagreeing.

HaYom conducted the opinion poll on Wednesday. The margin of error was 4.4 per cent.–Agencies