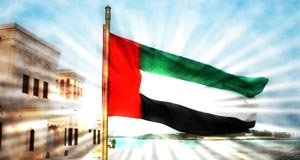 DUBAI, Nov 3 — In a statement to the people of UAE on Sunday, the Vice President and Prime Minister and Ruler of Dubai His Highness Sheikh Mohammed bin Rashid Al Maktoum called for launching a national, popular, comprehensive and continuous campaign to mark the ”Flag Day” and appealed to all Emiratis to hoist the flag and participate in the national event. The Flag day falls on the 3rd of November, the day of President His Highness Sheikh Khalifa bin Zayed Al Nahyan’s accession, as a President to the UAE.
Sheikh Mohammed said: “The flag demonstrates our unity behind our leader, President His Highness Sheikh Khalifa bin Zayed Al Nahyan, our love to him, and the pledge of the people to be loyal to him as a president and leader of the UAE.”

He also directed the federal department and ministries to hoist the flag simultaneously on Wednesday, 6th November, at 12 pm, as a symbol of unification of the UAE’s flag across all its land and buildings.

On this occasion, the Cabinet has issued an integrated guide on uses of the UAE flag, containing a detailed protocol on how to deal with the flag in all circumstances so as to preserve its sovereign status and keep it as a symbol of the UAE and its people.

He added “On this day we remember the white hands of the founding fathers, who hoisted the flag for the first time before 42 years ago and we also recall all the sacrifices that kept it flying high for four decades. We also remember the achievements and gains, which established the advanced stature of the country among the nations and peoples.”

Sheikh Mohammed said that the UAE flag is not only a flag, but it is a mean of our love and readiness to sacrifice our souls for the dignity and pride of our country, ”Our flag is a source of dignity, strength, pride and respect of this people … let’s keep it flying a loft and as a source of inspiration in every place and time,” Sheikh Mohammed said.–Wam