MODI AND THE UNMAKING OF INDIA 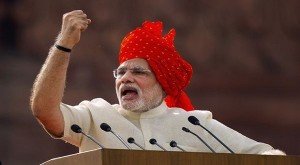 Even as he remains in bed with the most rabid and virulent elements of the Parivar, Modi has relentlessly preached ‘sab ka saath, sab ka vikas’ (together with all, progress for all) with a straight face, perpetuating a fiction that means all sorts of things to all people. Indeed, this barefaced duplicity – saying something and encouraging his flock to do quite the opposite – has been the hallmark and key to his journey and success all these years. Frequent foreign sojourns around the world and powwowing with the high and mighty have ensured that the world leaders and their media remain soft and helpfully indifferent even as the Hindutva bigots kill, maim and terrorise Muslims across the land in the name of cow and ‘love jihad’.

[dropcap]I[/dropcap]T seems nothing will now stop the juggernaut called Narendra Modi. After recent electoral successes, most notably in Uttar Pradesh, the Prime Minister looks totally unassailable – the lord of all he surveys. Even his worst critics like Aakar Patel and Rajdeep Sardesai have concluded that Modi is the most powerful politician and Prime Minister India has ever had. Not a small feat for someone who had long been haunted by the infamous Gujarat 2002 pogrom and remained an international pariah for years.

Modi’s meteoric rise would serve as a fascinating case study for all the students of politics and history. It will shed light on how an RSS pracharak with little formal education and political experience, and parachuted by the BJP as the Gujarat chief minister, ripped the rule book to succeed.

The numerous court cases and testimonies, including a harsh rebuke by the highest court in the land for the 2002 riots, have only been exploited and used to add to his reputation and legend.

Exploiting his popularity as a Muslim-baiter and tough-talking administrator, he upstaged his mentor Lal Krishna Advani as well as contemporaries like Sushma Swaraj and Rajnath Singh, winning the BJP’s nomination for the top job.

The recent reopening of the Babri Masjid demolition case against Advani and other fellow travellers is part of the same game of Chanakyan realpolitik. Besides, it keeps the pot boiling nicely until 2019.

Even as he remains in bed with the most rabid and virulent elements of the Parivar, Modi has relentlessly preached ‘sab ka saath, sab ka vikas’ (together with all, progress for all) with a straight face, perpetuating a fiction that means all sorts of things to all people. Indeed, this barefaced duplicity – saying something and encouraging his flock to do quite the opposite – has been the hallmark and key to his journey and success all these years.

Frequent foreign sojourns around the world and powwowing with the high and mighty have ensured that the world leaders and their media remain soft and helpfully indifferent even as the Hindutva bigots kill, maim and terrorise Muslims across the land in the name of cow and ‘love jihad’.

Not a day passes without reports about these defenders of holy cow targeting Muslims and even unsuspecting, innocent bystanders all over the country. Over the past year or so, a dozen people have been killed in these attacks and hundreds grievously injured. Now even poor Kashmiri Gujjar nomads, who live off their livestock, aren’t spared.

If such attacks targeting religious minorities had taken place in other democracies, they would have set off a political storm, if not brought down governments. In the world’s largest democracy though, they barely cause a ripple. The daily attacks on Muslims, Christians and low-caste Dalits are now the new normal of Modi’s India.

In any other country, a character like Yogi Adityanath would be behind bars for his incendiary hate speech and attacks on minorities – the militant priest of Gorakhnath temple indeed faces a number of cases for instigating riots and religious violence.

Under Modi, he has been crowned the ruler of India’s largest state with a population of 210 million. Is it any surprise then his rag-tag army of thugs has been going on rampage across the state, waving swords and sticks? Last week, a BJP MP led a violent mob to ransack the office of a top cop in Saharanpur, UP, for trying to prevent a riot.

It’s not just UP: it is a free-for-all out there in much of the country, except for the south of Vindhyas. Jiski lathi uski bhains (the might is right). As the BJP’s rule and sphere of influence grows, so does its hubris and cynical hate politics. Except for some states in the south, the whole of India – the land of Buddha and Gandhi – is now ruled by folks who have always opposed and fought their pacific teachings and worldview.

No wonder the ‘party with a difference’ feels increasingly emboldened and is showing its true colours. And in the line of fire are India’s Muslims who remain the most politically and economically dispossessed community in the country despite having ruled India for nearly a thousand years. Worse than lowest of the low – low-caste Dalits – the Muslims have become the new Dalits of India and are being hunted like animals by peace-loving folks who claim to worship cows. The Muslims find themselves in the same position as the African Americans once did in the land of the free. We have become the Jim Crows of India.

What is remarkable about this whole state of affairs is the extraordinary veneer of peace and progress that the dear leader has maintained, preaching tolerance, yoga and war on terror around the world.

While he preaches the virtues of ‘Digital India’, ‘Make in India’, ‘Clean India’ and all that jazz, the saffron brotherhood is busy dismantling the very idea of a democratic and inclusive India and dragging the country back to the Stone Age. It is no coincidence that the RSS shakhas (units) poisoning the minds of generations of Indians and training them in martial arts daily against the demonised ‘Other’ have mushroomed in thousands across the country over the past few years.

Unfortunately, in this battle for India’s soul, the media has been acting as the handmaiden and instrument of the government. By failing to confront and question the powers that be, it has not just neglected its duty, it has enabled the ongoing war on the constitution that promises equal rights and equal share in power for all. Except for some courageous voices on the Left, most media houses – many of them now owned by the PM’s cronies – and journalists have chosen to crawl before the emperor.

The international media is no better. Save for occasional reportage and angry editorials by the New York Times and the Guardian, much of the world media and international community remains indifferent to the unfolding disaster in India. Who cares as long as India remains the fastest growing economy and rolls out red carpet for international investors?

In the words of eminent lawyer and rights activist Prashant Bhushan, “What is happening in the country today has many similarities with what happened in Germany and Italy in the 30s when Hitler and Mussolini came to power. The ideology is similar and so is the method of mass mobilisation. The resemblance of the Nazi methods to the ones deployed by the current political dispensation in India is disconcerting”.

Bhushan goes on to argue: “Today, the constitution and the rule of law are both under unprecedented threat. The judiciary and the media, which are supposed to check such threats, are also not playing their role. This happens when fascist regimes emerge through elections. Such threats, browbeating and sometimes blackmail often lead to the subjugation and collapse of the regulatory institutions like the judiciary and the media. That’s exactly what is happening today. If all this goes unchecked, the consequences will be disastrous. India will descend into the same kind of situation that Germany and Italy faced, with the collapse of constitution, rule of law and democracy.”

This breathless march to hell can be stopped if India’s silent, sensible majority speaks up.