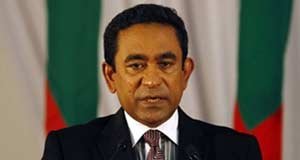 NEW DELHI, Jan 1 – New Maldives President Abdulla Yameen arrived here Wednesday on a four-day state visit that would see both sides seeking to iron out past differences and boost ties.

Yameen, the half-brother of former long-time president Maumoon Abdul Gayoom, and his wife Fathimath Ibrahim were received at the airport by Minister of State for External Affairs E. Ahamed.

Yameen, the sixth president of the Maldives, belongs to the Progressive Party of Maldives (PPM). This is his first official visit abroad after assuming office in November.

India has said the visit would provide an opportunity to further enhance the close and multifaceted relations between India and the Maldives.

President Pranab Mukherjee is to host a banquet in honour of President Yameen Thursday.

He is to hold bilateral talks with Prime Minister Manmohan Singh and meet Indian business leaders over lunch Thursday.

The Maldives president will visit Udaipur and Agra during the visit.

The Maldives and India are expected to conclude bilateral agreements in the areas of health and visa facilitation.

The cancellation by the Maldives of the $500 million contract with India’s GMR Group and visa issues are expected to figure prominently during talks between Yameen and Manmohan Singh. —IANS

Previous articleDUBAI USHERS IN 2014 WITH A BANG
Next article108 JOURNALISTS KILLED IN 2013; 29PC IN MIDDLE EAST