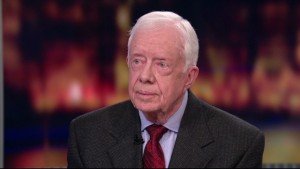 Former US President Jimmy Carter is calling on the Obama administration to recognize Palestinian statehood before leaving office January 20.

Carter, who is strong proponent for Palestinian rights and a two-state solution between Israelis and Palestinians, praised the Obama administration in a New York Times op-ed out Monday for its support for a “negotiated end to the conflict based on two states,” but warned this work could be undone with an incoming Republican administration.
“I am convinced that the United States can still shape the future of the Israeli-Palestinian conflict before a change in presidents, but time is very short, ” Carter wrote. “The simple but vital step this administration must take before its term expires on Jan. 20 is to grant American diplomatic recognition to the state of Palestine.”
The former President also called for the UN Security Council to pass a resolution “laying out the parameters for resolving the conflict.”
“It should reaffirm the illegality of all Israeli settlements beyond the 1967 borders, while leaving open the possibility that the parties could negotiate modifications,” he said.
“Security guarantees for both Israel and Palestine are imperative, and the resolution must acknowledge the right of both the states of Israel and Palestine to live in peace and security.”
Carter went on to criticize the controversial building of Israeli settlements on Palestinian land.
“Israel is building more and more settlements, displacing Palestinians and entrenching its occupation of Palestinian lands,” Carter wrote. “Over 4.5 million Palestinians live in these occupied territories, but are not citizens of Israel. Most live largely under Israeli military rule, and do not vote in Israel’s national elections.”
Carter is one of Israel’s most vocal American critics. In his 2006 book, “Palestine: Peace Not Apartheid,” he compared Israel’s military occupation in the West Bank to the apartheid system in South Africa.
Obama has also been critical of Israel, calling in 2009 for a complete freeze on the building of Israeli settlements.
However, President-elect Donald Trump’s position has thrilled many supporters of Israel, as well as Israel’s political right wing. As a candidate, Trump promised to recognize Jerusalem as the undivided capital of Israel and renogotiate the Iran nuclear deal, which has been criticized by Israel’s leaders.
The leader of the right-wing Jewish Home party Naftali Bennett, claimed a Trump presidency allows Israel to fully dismiss the notion of a Palestinian state. “This is the position of the President-elect, as written in his platform, and it should be our policy, plain and simple. The era of a Palestinian state is over.”
Courtesy: CNN