In Their Own Words: When Trump and Obama Sounded the Same 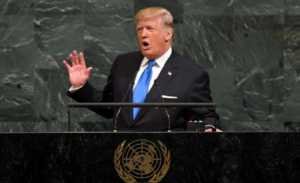 It should not be too difficult to predict the general rhetoric of Trump’s last address to the UN General Assembly; alas, more threats, grandstanding, romanticizing war and another desperate attempt at keeping a dying world order standing, even if for a bit longer.

The nature of the rhetoric in Donald Trump’s first speech at the United Nations General Assembly was largely predictable. Even his bizarre threat to “totally destroy North Korea” was consistent with his overall style and previous warnings.

But how different was his speech, if compared with the first and last UN speeches of President Barack Obama?

Soon after former US President Barack Obama’s arrival in the Oval Office, Harvard Business School Professor, John A. Quelch injected Ruskin’s quote to re-assert the need to strike the balance in US internal politics and foreign policy. Like others, he emphasized that Obama must utilize his positive image to restore ‘the American brand’, which was badly tarnished during the two terms of George W. Bush.

Journalist and author, John Pilger was quite astute when he – as early as 2009 – raised the issue of the Obama brand.

Using a plagiarized slogan from the South American union organizer, Cesar Chavez, “Sí, se puede!” – “Yes, we can!” – the Obama campaign managed to breathe life into a greatly discredited US political system.

The brand was such a success that, even before Obama won the people’s vote, the ‘Obama brand’ also won the votes of hundreds of top advertising executives who granted the campaign the top award at the annual Association of National Advertisers conference. Thus the ‘Obama brand’ became the “Advertising Age’s marketer of the year for 2008.”

The appreciation of words and skills at the expense of real action, continues to resurface whenever Trump sends an embarrassing tweet or gives a belligerent speech. His first speech to the UN on September 19 was a case in point.

But the fact is, despite the vastly different style – Trump’s confrontational approach compared with Obama’s composed attitude – their words promise “more of the same.” To demonstrate, here are the main subjects they raised in their UN speeches, in their own words:

On Terrorism and Extremism

Neither Obama nor Trump took any responsibility for their country’s direct or indirect role in fomenting terrorism – for example, their country’s military invasions of Afghanistan (2001) and Iraq (2003). Instead, they spread fear, while positioning themselves as the global safety net against terrorists and those who fund or support them.

Obama (2009): “Extremists sowing terror in pockets of the world; protracted conflicts that grind on and on; genocide; mass atrocities; more nations with nuclear weapons; melting ice caps and ravaged populations; persistent poverty and pandemic disease. I say this not to sow fear, but to state a fact: The magnitude of our challenges has yet to be met by the measure of our actions.”

Trump (2017): “Terrorists and extremists have gathered strength and spread to every region of the planet. Rogue regimes represented in this body not only support terror but threaten other nations and their own people with the most destructive weapons known to humanity.”

On North Korea and Nuclear Weapons

For both Trump and Obama, war is a necessary evil, and only the US is capable of making the determination when such evil is to be applied. Neither seemed bothered by the fact that the US is only second to Russia in the number of its nuclear warheads, as it has stockpiled 6,800 nuclear weapons compared with North Korea’s estimated 10-40 devices.

Obama (2016): “We cannot escape the prospect of nuclear war unless we all commit to stopping the spread of nuclear weapons and pursuing a world without them … When North Korea tests a bomb that endangers all of us. And any country that breaks this basic bargain must face consequences.”

Trump (2017): “Our military will soon be the strongest it has ever been … North Korea’s reckless pursuit of nuclear weapons and ballistic missiles threatens the entire world with unthinkable loss of human life … The United States has great strength and patience, but if it is forced to defend itself or its allies, we will have no choice but to totally destroy North Korea.”

On Russia and China

Once again, both Trump and Obama imposed themselves as guardians of a US-centric world order. Their perceptions of China and Russia, in particular, remained unchanged.

Obama (2016): “If Russia continues to interfere in the affairs of its neighbors, it may be popular at home, it may fuel nationalist fervor for a time, but over time it is also going to diminish its stature and make its borders less secure.  In the South China Sea, a peaceful resolution of disputes offered by law will mean far greater stability than the militarization of a few rocks and reefs.”

Trump (2017): “We must protect our nations, their interests and their futures. We must reject threats to sovereignty from the Ukraine to the South China Sea.”

On Palestine and Israel

Both presidents were quite supportive of Israel. In his speech, Trump did not mention the words ‘Palestine’ or ‘the Palestinians’. He only mentioned Israel in the context of an alleged Iranian threat to destroy it.

On the other hand, Obama’s first UN speech promised the reactivation of the defunct ‘peace process’. In his last speech, he commenced his rhetoric by blaming Palestinians, although spoke of Israeli responsibility, as well. However, Obama had given Israel more money than any other president in history.

Obama (2009): “I appointed a Special Envoy for Middle East Peace, and America has worked steadily and aggressively to advance the cause of two states – Israel and Palestine – in which peace and security take root, and the rights of both Israelis and Palestinians are respected.”

Obama (2016): “Surely, Israelis and Palestinians will be better off if Palestinians reject incitement and recognize the legitimacy of Israel, but Israel recognizes that it cannot permanently occupy and settle Palestinian land.”

On Interventionism, US Exceptionalism

Both presidents provided a romantic depiction of their country’s interventionist role in world affairs. Again, much self-admiration and no responsibility whatsoever.

Obama (2009): “The world must stand together to demonstrate that international law is not an empty promise, and that treaties will be enforced.”

Obama (2016): “The mindset of sectarianism, and extremism, and bloodletting, and retribution that has been taking place will not be quickly reversed … (We must remain) united and relentless in destroying networks like ISIL (Daesh), which show no respect for human life.”

Trump (2017): “From the beaches of Europe to the deserts of the Middle East to the jungles of Asia, it is an eternal credit to the American character that, even after we and our allies emerge victorious from the bloodiest war in history, we did not seek territorial expansion or attempt to oppose and impose our way of life on others.”

Neither president had a true vision, either. For no honest assessment of the present and a meaningful vision for the future can be achieved without self-introspection and serious acceptance of responsibility. Instead, their ‘visions’ were mostly rehashed, romanticized language of no correlation to reality.

Obama (2016): “We must respect the meaning that people draw from their own traditions – from their religion, from their ethnicity, from their sense of nationhood …”

Trump (2017): “We want harmony and friendship, not conflict and strife. We are guided by outcomes, not ideologies. We have a policy of principled realism, rooted in shared goal, interests, and values.”

Based on the obvious logic above, it should not be too difficult to predict the general rhetoric of Trump’s last address to the UN General Assembly; alas, more threats, grandstanding, romanticizing war and another desperate attempt at keeping a dying world order standing, even if for a bit longer.

(Romana Rubeo, an Italian writer, contributed to this article.)

– Ramzy Baroud is a journalist, author and editor of Palestine Chronicle. His forthcoming book is ‘The Last Earth: A Palestinian Story’ (Pluto Press). Baroud has a Ph.D. in Palestine Studies from the University of Exeter and is a Non-Resident Scholar at Orfalea Center for Global and International Studies, University of California. Visit his website: www.ramzybaroud.net.