How About De-recognizing the BJP? 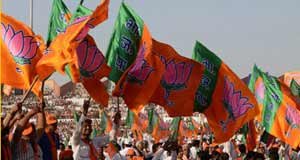 [dropcap]T[/dropcap]he BJP has been clamouring for the de-recognition of AAP for its ‘anarchism’ and its lack of faith in institutions put in place by the Constitution, but faced with the sting by Cobrapost on its own responsibility for the Babri Masjid demolition, its only response is that  the Election Commission should stop its broadcast in view of the elections. In its characteristic fashion, the BJP leaders went on to accuse the sting operation of being ‘Congress sponsored’ – looks like this party has even lost the capacity to make a reasonable argument about anything. Meanwhile, all of yesterday the major channels were  dancing tango with the BJP in expressing suspicion about the ‘timing’ of the release. Not one of the channels had anything to say about the content of the sting.

And why does the BJP want the EC to stop the broadcast? Because now it is clear that even as top BJP leaders and the Kalyan Singh government gave their commitment to the Supreme Court of India that nothing would happen to the mosque, the leaders were planning its demolition. That is what the sting operation shows. It shows, in the words of the actual dramatis personae, how the young recruits were trained by retired military personnel, without  being told what their mission was. The training was conducted in strict secrecy and with the full knowledge of at least some of the BJP bigwigs, the RSS and the Shiv Sena.

And the BJP expects as its right, that this proof of its direct involvement in the pre-meditated attack on the Constitution and the institutions of public life, should be removed from public view. And to cap its sense of the absurd, its spokesperson claim a conspiracy in the sting operation, as if the people on camera were fictitious characters who had been drugged by the Cobrapost editor and made to say things that amounted to an attempt to malign the BJP. (The spokesperson asked the EC to take action “against whoever is behind such a mischievous conspiracy“, according to the TOI report linked below.)

What do the sting tapes say? Here are some extracts from a news report:

A sting operation by investigative website Cobra Post has claimed that Babri Masjid demolition was not a sudden action of the frenzied karsevaks but a meticulously planned operation carried out by trained cadre of right wing groups that include the Rashtriya Swayamsevak Sangh(RSS) and the Shiv Sena. The operation also claims that senior leaders like Lal Krishna Advani, Kalyan Singh, Bal Thackeray apparently knew about the plan.

“The training regime included imparting skills such as climbing taller structures with help of grappling hooks and ropes and digging earth with implements like pickaxes and spades, apart from regular drills and physical exercises.

Traditional implements such as chisels, heavy-duty hammers, pickaxes, spades, sabbals, and other tools were procured in large numbers and put to use on December 6, to pull the disputed structure down. A Balidani Jatha, or suicide squad, was formed with the trained RSS workers,” read the press-release posted at the website.

And here are extracts from another report:

Their versions make it appear that the plot to demolish the mosque was hatched amid utmost secrecy. Those recruited for training weren’t told their mission till a month ahead of Babri’s fall. At Sarkhej, Gujarat, Bajrang Dal conducted a month-long training in June 1992 for 38 of its cadre from different regions. The trainers were retired high-ranking military officers, while Acharya Giriraj Kishore, Acharya Dharmendra, Praveen Togadia, Jaibhan Paweya and Ashok Singhal held indoctrination sessions.

While the VHP and Bajrang Dal were holding a secret meeting at Ayodhya to plan the Babri assault, Sena leaders too were deliberating on the fate of the shrine in North Avenue. Save and Pradhan, among others, attended the meeting. If everything failed, Sena had a plan B: Dynamite Babri.

Claims Goel: “Humare paas dynamite bhi thha, hum dynamite bhi lekar gaye thhe wahan par agar zaroorat padti usko bhi chala dete iss taiyari se gaye the hum (We were carrying dynamite. If the need arose, we had gone prepared to use it).” In 1990, Sena’s Suresh Baghel had tried this, but his attempt was foiled and he was arrested with 28 dynamite sticks.

Perhaps, then it is time to raise the demand for the de-recognition of the BJP?

Not quite. For political differences, even antagonisms, cannot be dealt with by legal-technical methods. Unlike the BJP, people who have faith in democracy recognize that even fascist ideas need to be fought and defeated in open battle. Raising demands of de-recognition or of lodging complaints against other parties with the EC on the flimsiest of grounds, as the BJP has been doing, only betray a failure of nerve.

The BJP today presents a sorry spectacle of a party that is completely bankrupt politically and devoid of all ethics – both these so eloquently personified by its megalomaniac prime ministerial candidate.

But perhaps those rigged Electronic Voting Machines calibrated to send every vote to the BJP might help? — kafila.org