Bloodbath in Nigeria; 135 killed in 3 Attacks 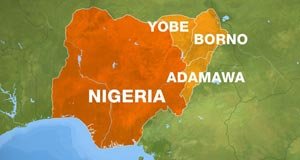 ABUJA, April 13 — As many as 135 civilians have been killed since Wednesday in north east Nigeria, a senior official from the region has revealed.

According to Borno state senator Ahmed Zannah, the killings were carried out in at least three separate attacks in the state. The attackers are suspected to be from the Islamist Boko Haram movement, BBC reported Sunday, according to IANS.

The attackers burned down the college library before escaping, Zannah said. The militants then attacked two villages near the border with Cameroon killing a further 130 people.

The attacks took place Wednesday and Thursday, with initial reports claiming around 70 people had been killed.

The Nigerian military was yet to comment on the attacks.

A state of emergency has been in place since last year in the states of Borno, Yobe and Adamawa in north-east Nigeria.

According to Amnesty International, at least 1,500 people, half of them civilian, have been killed in the restive north-eastern region this year.

The organisation blamed both “an increase in attacks by Boko Haram and uncontrolled reprisals by Nigeria’s security forces” for the high toll.

Previous articlePalestinian Children’s Day 2014
Next articleHas Malala Become a Puppet of the West?