Why Modi threatens the Idea of India 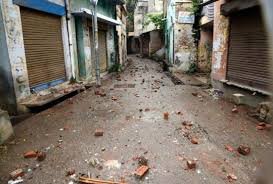 The idea of India is based on the country’s diversity. What has happened at Muzzafarnagar is a challenge to the very idea

Gujarat Chief Minister Narendra Modi, the prime ministerial candidate of the Bharatiya Janata Party (BJP), has asked the Jamiat Ulema Hind, representing the Muslims, to list four or five steps he should announce to win their confidence. The Jamiat has rightly pointed out that it was for Modi to think how to win the trust of Muslims. One thing Modi could do straightaway is to apologize for the 2002 riots in the state, reportedly blessed by him after the burning of some Hindu pilgrims in a train compartment at Godhra, not far from Ahmedabad.

There is enough evidence to confirm that he convened a meeting of top officials to plan and execute an exercise to kill the Muslims. HirenPandya, a minister in Modi’s cabinet, had admitted after having participated in the riots that they were preplanned and that the police were asked not to interfere. He was murdered and till today the murderer has not been brought to book. And only recently has a top police officer confessed in a letter to the Central Bureau of Investigation (CBI) that Modi used him to stage the false encounter.

In his first speech after the nomination, Modi talked about a range of issues — ties with neighboring countries, terrorism and defense. But he did not utter a word about Muzzafarnagar’s communal riots. The city, only two hours’ drive from Delhi, witnessed the killing of 50 persons and the exodus of nearly 40,000 people — Hindus and Muslims, who have lived together for centuries.

Indeed, this is the result of Modi-type of politics of polarization which has challenged India’s credentials of secularism. Modi is a Hindutva poster-boy, as the media describes him. After 66 years of independence, the two communities tend to jump at each other’s throat on the call of religious leaders or politicians in that garb. The nation has to introspect why the people play into their hands and why it has failed to establish a secular polity.

Modi does not care about India’s ethos of pluralism. He has played the Hindu card because he believes that secularism does not sit well in a Hindu-majority country. If he has learned the lesson after the Gujarat riots, as he claims, there is no indication of that. He compared the other day the victims in the Gujarat riots as the puppies which get crushed under a speeding car.

The RSS, which has nurtured Modi, believes that it wants the next election to be fought on the plank of “minority aggressiveness.” It is misinterpreting the minorities’ articulation for their identity. Even if there is aggressiveness, it can be tackled. But the majority’s aggressiveness can turn into fascism. This is what happened in Germany where the Nazis took over and Hitler emerged on the scene.

It is unfortunate that the BJP has selected Modi, knowing too well that the party was defeated in 2004 and 2009 elections because of its communal agenda. Even AtalBehari Vajpayee’s liberal image could not wear off the stigma of parochialism the party has.

By and large, India is a tolerant society. The people do not mix religion with politics. The BJP has neither understood them, nor their aspirations. The idea of India is based on the country’s diversity. What has happened at Muzzafarnagar is a challenge to the very idea. Once again the BJP has poured oil on the fuel through a fake video.

Refugees from the villages of Muzaffarnagar riots between the Hindu Jats and Muslims say that they were attacked by the outsiders. I am reminded that after the partition we too were forced to quit our homes by the outsiders. Our Muslim friends gave us shelter and provided us with rations for a month before we left Sialkot.

The victims of Muzaffarnagar complain bitterly that neighbors watched the mayhem but did not come to their rescue to stop the killing and destruction. The kinship dries up when rioting takes place. The Muzaffarnagar happenings are disconcerting because the communal virus has spread to the rural areas. The administration always fails because it has got politicized and awaits word from the ruling party. Officials did not take action fearing repercussions. The police are contaminated and tilt towards the Hindus. That is 15% of the Muslims all over the country.

What happened in Muzaffarnagar, according to the reports in the media, was an instigated riot, suggesting a conspiracy on the part of the BJP. A Muslim youth was killed for eve-teasing. In retaliation, two Hindu Jat boys were lynched. And then all the hell broke. Leaders, both from the Hindu and Muslim communities, delivered inflammatory speeches.

The BJP further fanned the fire by releasing a fake video, showing the use of violence somewhere else to ‘prove’ the atrocities against the Hindus. A Muslim cleric led a mob after the prayers on Friday. And, as the state governor has said in a report to the Centre, theadministration has become more effete than the ruling Mulayam Singh Yadav’sSamajwadi Party wanted to exploit the situation. But it was confused.

The BJP played a major role in polluting the atmosphere through yatras for building a Ram temple at the site where the Babri Masjid stood before its destruction. The RSS sees its chance in the next elections. It is doing everything possible to destroy the ethos of national struggle to establish a democratic, secular state. Modi’s projection, once the RSS pracharak and an authoritarian by nature, fits into the agenda for a Hindu Rashtra.

I sympathize with LalKrishnaAdvani. I have seen how defeated he was towards end of 1979 when the Janata Party ousted him for refusing to sever links with the RSS. Instead, he founded in 1980 the BJP and made AtalBehari Vajpayee, who too had been thrown out, as president. Today once again, Advani is forlorn and lonely. Again, the RSS is responsible for his isolation. It has fielded Modi for the prime minister’s office. Advani has not liked the manner in which the RSS has imposed Modi on the BJP. Apparently, the RSS feels that if there’s anybody who meets the ideological stance of Hindu Rashtra, it will be Modi, not Advani who over the years has shed bigotry and regards Mohammad Ali Jinnah, founder of Pakistan, as secular.