WHO DO MUSLIMS VOTE FOR? 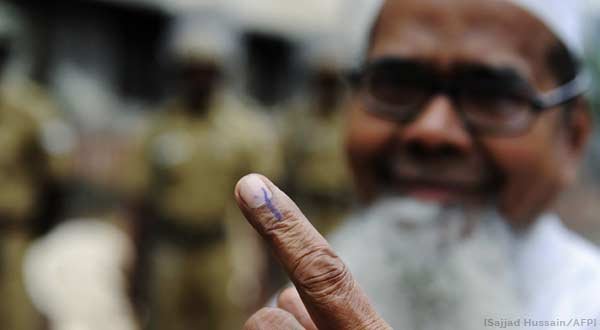 [dropcap]T[/dropcap]he General Elections are now only days away. Opinion polls are predicting more than 220 seats for BJP-led NDA and about 130 seats for Congress-led UPA. Others are projected to gain more number of seats than these two alliances.

These projections may prove wrong because of the simple fact that, while the opinion polls reflect the first choices of the people contacted, the people do not necessarily vote for their first choices. Often the other considerations – local factors, caste and community of the voters and above all the chances of winning make them gravitate towards the two or three main contenders.

Muslims too are busy calculating the various options. There is no denying the fact that the overwhelming majority of them will vote against BJP. This is unfortunate — thanks to the strong presence of the forces of Hindutva — Muslims have for long been forced to vote on negative lines.

The agenda of development and empowerment takes the back seat and the security and emotional issues lead them to vote for certain parties, which do not make any serious attempts to empower them because of the fear of the backlash in Hindu community.

This is true of almost all parties, especially the parties that try to pose as secular. What can be more unfortunate than the truth that secularism in India now means denying Muslims their genuine rights and opportunities and blocking them from playing a national role as equal citizens.

Congress of course is the biggest culprit in this regard, and I fear AAP can also go the same way. If AAP emerges a credible alternative to Congress at the national level, it will be a positive development as it would mean two national “secular” alternatives, which is good for the country. But if their secularism continues to be based on denial of opportunities to Muslims in return of security and guarantee to practice rituals, Muslims would soon enter a phase in history where they will have to find other ways to make their presence felt.

Many Muslim analysts and groups (including this writer) presented their charters of expectations from different political parties. These included increased share in political and administrative set-up of the country and affirmative steps in the field of educational and economic empowerment. If we examine the list of the tickets allotted by different political parties, we find that Bahujan Samaj Party is the only one that comes out with flying colors.

It has allotted 19 out of 80 Lok Sabha seats in UP to Muslims. Mayawati has to be complimented for the bold declaration proving that the true secularism in India means representation of all sections of society in political institutions in proportion to their population and not “indifference to caste and community considerations in seat selection process.”

A Parliament with equitable distribution of seats among upper caste Hindus, OBCs, Dalits, Muslims and other minorities certainly presents a brighter image of secularism than that with extreme under-representation of one community and the over-representation of others. The question of merit comes only next. Those who talk of “merit” as the criterion do perhaps believe that Muslims do not have considerable number of meritorious candidates. Ironically, if the list of their declared candidates is scrutinized on the basis of merit, their claims will fall flat.

I do personally believe that alignment with a party like BSP (on equal footing) can be the best bet in the long run for the empowerment of the underprivileged sections of society within the secular fabric of the country. But somehow Mayawati has not been able to win the confidence of Muslims.

The major reason is perhaps her reluctance to allow other voices in his party, and Muslim members of her party have failed to connect with the Muslim community leaders as well as the masses. If she can change the style of functioning of her party, she can hope to get the support of Muslims in a more vocal way.

Still I feel that her party must be the first choice for Muslims in UP wherever its candidate is in a good position to beat BJP. The rural dominating constituencies should have this option most in mind. In most of the rural areas Muslim support to BSP should be a formidable proposition. Muslims must not simply vote for BSP Muslim candidates but also other BSP candidates if they are the main contenders.

Despite a strong anti-incumbency wave against Congress and its failure in convincing Muslims, it remains an open choice. If Manmohan Singh cabinet had not been such a dismal failure in connecting with the people, Rahul Gandhi could have been the most popular face in this election. But the PM and senior cabinet ministers have failed Congress.

It is not that Congress has done badly in last 10 years. Their performance has been better than average, and they have taken several revolutionary steps. But the first one of them, RTI, has consumed Congress itself. It provided the RTI activists (Kejriwal being the most known) an opportunity to unearth corruption in the government, and the ministers failed to wipe out the mud that stuck the government.

To be fair to UPA, it has tried to implement Sachar Committee recommendations with mixed successes and during last few months has taken several important steps particularly related to Waqf and educational scholarships. Despite its declining popularity, it still is the main party opposed to BJP, and wherever Congress candidates are in a strong position, Muslims should have no problem in voting for Congress. It should also be remembered that Congress is too big a party to die and is almost sure to make a comeback in not so distant a future.

Rahul Gandhi is perhaps the only gentleman in the dirty politics of the country. I have closely watched him for more than a year, and I sincerely feel that Congress under in his leadership will become more secular, more people-friendly and more inclusive. But for that Rahul Gandhi will have to realize that mere attacks against BJP on ideological grounds would not suffice; he will have to do something concrete, which makes Muslims believe in him, and this should be done in a shrewd way on the lines of Mayawai whose formula of Bahujan Samaj can be adopted even if without an open declaration.

AAP is a new phenomenon. Not only this phenomenon remains a mystery in itself, it has also turned the whole election mysterious. I have begun to admire it on two accounts. It has in recent days adopted as one of its main plank an issue which has been my greatest concern during last 15 years: the role of corporate in the problems of the nation. If the party can keep its concentration on this one issue, we can hope to have a revolution in India.

Second, its leader and some of his key associates have mastered the art of shaking the nation. Goodness alone does not produce the desired results unless it combines with the shrewdness to get it accepted. But while I admire the AAP as a social movement, I am till now not convinced about the political party. Once a party comes into being and fights a national election, it has to unfold its major policies quickly.

As far as the issues like communalism and the empowerment of Muslims are concerned, its approach is not different from that of Congress. If it wants the votes of Muslims, it has to ensure that Muslims are not denied genuine representation in political institutions in the name of secularism.

As far as the current election scene is concerned, it is not clear yet how AAP is going to build its momentum as the election date approaches. It appears that in recent times its popularity has plummeted among middle class Hindus and has jumped among Muslims. Muslims have to be very careful. They must vote for AAP only where they are in strong position. Otherwise it will help the cause of BJP.

Samajwadi Party and regional parties are the other options for Muslims. SP used to be popular among Muslims but Muzaffarnagar riots have caused deep resentment. Still it cannot be dismissed altogether and should remain as one of the options. Mamta Banerjee, Jayalalithaa and Karunanidhi need to be opposed or supported on the basis of the regional or local considerations.

A word about BJP. Modi or no Modi, BJP remains untouchable for Muslims. The best thing that can happen for BJP will be that its gets defeated in the elections and fails to make government. If this happens, hopefully BJP will learn its lesson. There is nothing wrong in fighting for the rights of a community or taking inspiration from religious principles of morality. But if it has to sustain itself as a political party, it will have to ensure that its campaign of Hindutva does not mean negation of whatever Muslims stand for.

The real battle of the right of Muslims must start after the elections. Muslims need to run a mass campaign not only to air their specific demands but also to build an opinion in favor of hard decisions aimed at all forms of what I call Dangerous Economics: Economic Disparity, commercialization of human susceptibilities, corruption, inflation and exploitation. If the election results bring a hung parliament, it would provide a huge opportunity for such a movement. And Muslim leaders cannot succeed unless they develop close relations with the good leaders of all other communities on the basis of a common minimum agenda.