NEW DELHI — Member of Parliament (Rajya Sabha) Nadimul Haque has written to the Union Home Minister Rajnath Singh, raising the issue of harassment of his father and Chief Editor, Akhbar-e-Mashrique Muhammad Wasimul Haque by the Delhi Police, over the publication of a news article.

Muhammad Wasimul Haque, 81, who has been awarded a lifetime achievement award by the Press Council of India, was picked up at his residence in Laxmi Nagar on December 3 at midnight by the Delhi Police and taken to the Shakarpur Police Station. Talking to Twocircles.net, Nadimul Haque, who wrote to Singh on December 7, said, “My father was made to accompany the officers to police station at about 1 a.m. at night. On reaching the Shakarpur police station, the SHO in charge of police station not only behaved inappropriately and disrespectfully with my father but stated the reason of ‘protection’ for calling my father to the police station against news published in Akhbar-e- Mashriq, which was in fact, supplied by INS India, a news agency.”

A few days ago, a news agency-based report had been published in Akhbar-E Mashrique simultaneously from Kolkata, Delhi and Ranchi. The news talked about the arrest of a Hindu Maha Sabha leader in Uttar Pradesh.

In the report, it said that due to a criminal offence of making inappropriate remarks against Prophet Muhammad, peace be upon him, Hindu Maha Sabha leader Kamalesh Tewary has been arrested and sent to judicial custody. The newspaper added a line, saying that if a radical religious leader had been arrested and sent to custody, it was a proof that the law of the country has been upheld and saved. 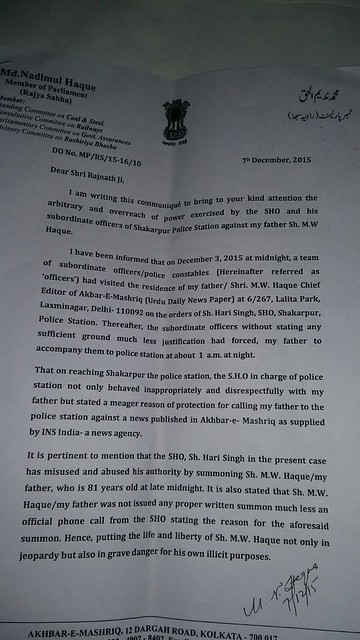 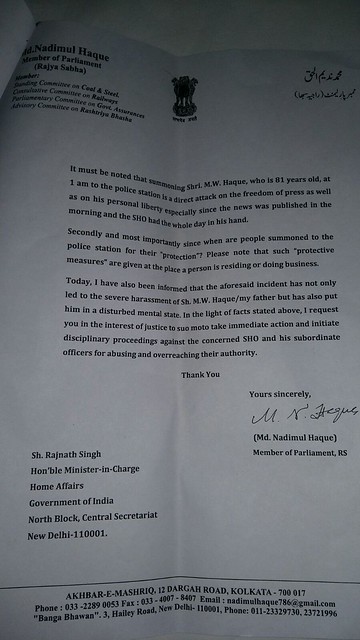 Agra Girl, Whose ‘Kidnapping’ Forced a Muslim Man to Go Underground, Was Living With Her Friend in Delhi