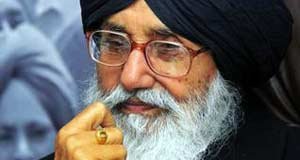 CHICAGO, Nov 28 – A US Court of Appeals has dismissed a human rights violation case against Punjab Chief Minister Parkash Singh Badal on the ground that a Sikh rights group failed to serve federal court summons on him.

Dismissing the case Tuesday, Judge Richard Posner of the 7th US Circuit Court of Appeals in Chicago, however, gave Sikhs for Justice (SFJ) the right to re-file the lawsuit against Badal.

In its appeal to the Chicago Court of Appeals, SFJ argued that 30 days given to plaintiffs were not sufficient to complete jurisdictional discovery to find out whether Badal or someone else was served the summons at Oak Creek High School in Wisconsin in August last year.

The trial court had dismissed the SFJ lawsuit against Badal on the grounds that Chicago-based Sikh Surinder Pal Singh Kalra was served with the summons instead of Badal.

“Since the issue of service was critical to the suit, and an additional thirty days for discovery would not have been a significant delay, it would have been reasonable for the judge to have granted the plaintiffs’ request,” Posner ruled.

SFJ said it will file an appeal with the US Supreme Court challenging the Court of Appeal’s order and seeking a review of its judgment. It can file the appeal in the apex court till Feb 24.

In seeking Supreme Court’s intervention, SFJ attorney Gurpatwant Singh Pannun said it would present evidence to show that agents of Badal influenced the testimony of Kalra who then claimed to have been served instead of Badal.

SFJ and Shiromani Akali Dal (Amritsar) have alleged that there have been several hundred cases of extrajudicial killings, police tortures and human rights violations against the Sikh community in Punjab during 12 years of the Badal rule-from 1997 to 2002 and from 2007 to present. IANS