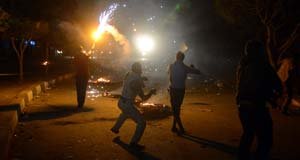 WASHINGTON — The US expressed concern about a new Egyptian law regulating demonstrations in the country, saying it will not help Egypt in its transition towards democracy.

“We are concerned about the potential effects of the new demonstrations law on peaceful assembly in Egypt,” Xinhua quoted State Department spokeswoman Jennifer Psaki as saying Monday.

She argued that it imposes restrictions on Egyptians’ ability to assemble peacefully and express their views.

She said the new law “does not meet international standards and will not move Egypt’s democratic transition forward”.

Under the law approved by Interim President Adly Mansour Sunday, all public assemblies must have a prior approval from the Interior Ministry.

Assemblies for political reasons are banned inside places of worships and protests are banned in front of vital government offices, military and archaeological sites and security forces are mandated to use rubber bullets and bird shots to disperse protesters.

“The US wants Egypt’s transition to an inclusive democracy to succeed,” Psaki said. “We urge the interim government to respect individual rights and we urge that the new constitution protect such rights.”

Mass protests led to the toppling of former President Hosni Mubarak in 2011, and two years later, another mass protests backed by the military ousted Mohamed Morsi, the first elected president in Egypt.

A referendum on the country’s new constitution will be held in January, Egypt’s Interim Prime Minister Hazem Beblawi said Monday.–IANS