UN Rapporteur on Palestine Calls for Economic Sanctions on Israel 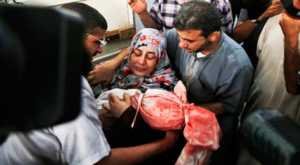 Strong words from the UN report and Lynk. Much more of the same is needed, a constant drumbeat of criticism, highlighting Israel’s ruthless practices, Palestinians victimized unjustly for decades, the world community failing to act responsibly on their behalf.

On Thursday, UN Special Rapporteur on Occupied Palestine Canadian Law Professor Michael Lynk explained  “the human rights situation in the Occupied Palestinian Territory is in a state of severe deterioration.”

“The human rights and humanitarian law violations associated with the occupation impact every aspect of life for Palestinians living in the West Bank, including East Jerusalem, and Gaza.”

“International law is the promise that states make to one another, and to their people, that rights will be respected, protections will be honored, agreements and obligations will be satisfied, and peace with justice will be pursued.”

“It is a tribute to the international community that it has sustained this vision of international law throughout its supervision of Israel’s occupation of the Palestinian territory.”

“But it is no tribute that – as the occupation deepened, as the occupier’s intentions became crystal clear, and as its defiance grew – the international community recoiled from answering Israel’s splintering of the Palestinian territory and disfiguring of the laws of occupation with the robust tools that international law and diplomacy provide.”

“International law, along with the peoples of Palestine and Israel, have all suffered in the process.”

“States who administer another territory under international supervision – whether as an occupier or a mandatory power – will cross the red line into illegality if they breach their fundamental obligations as alien rulers.”

“The Special Rapporteur submits that Israel’s role as occupant has crossed this red line.”

“The challenge now facing the international community is to assess this analysis and, if accepted, to devise and employ the appropriate diplomatic and legal steps that, measure by measure, would completely and finally end the occupation.”

“A determination that Israel’s role as occupant is now illegal would serve several significant purposes.”

“First, it would encourage member states to take all reasonable steps to prevent or discourage national institutions, organizations and corporations within their jurisdiction from engaging in activities that would invest in, or sustain, the occupation.”

“Second, it would encourage national and international courts to apply the appropriate laws within their jurisdiction that would prevent or discourage cooperation with entities that invest in, or sustain, the occupation.”

“Third, it would invite the international community to review its various forms of cooperation with the occupying power as long as it continues to administer the occupation unlawfully.”

“Fourth, it would provide a solid precedent for the international community when judging other occupations of long duration.”

“Most of all, such a determination would confirm the moral importance of upholding the international rule of law when aiding the besieged and the vulnerable.”

Based on what the report quoted above states, Lynk urged imposition of economic sanctions on Israel.

“Israel is very dependent upon trade with the outside world,” he explained, adding:

Strong words from the UN report and Lynk. Much more of the same is needed, a constant drumbeat of criticism, highlighting Israel’s ruthless practices, Palestinians victimized unjustly for decades, the world community failing to act responsibly on their behalf.

Change is long overdue to hold Israel accountable for its high crimes. Imposing economic sanctions would hurt most, sending a powerful message understood by its rogue regime.

“The United States will continue to oppose attempts to undermine the UN system through actions that unfairly target Israel.”

Washington and Israel partner in each other’s high crimes. One rogue state supports the other, humanity paying the price.

Previous articleA Farce That Is “Appeasement of Muslims” in India
Next article‘I May Be Killed Soon, My Father Hits Me’: Hadiya Pleads For Help In New Video