The War in Syria and Media Games 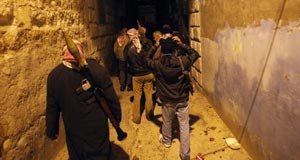 The Syrian opposition is not perfect by a long shot. Many of them are disorganized, and a few of them are no better than crooks. But the vast majority of them have are fighting for a better future for Syria

There have been many claims made about who is fighting in Syria, and perhaps more importantly, what goals they are fighting for. At the beginning of the crisis almost three years ago, nobody believed Assad and his regime when they said that the unarmed protestors being killed were “terrorists” and “Al Qaeda.”

Branding the opposition in this way was a desperate manner of justifying the killing of unarmed Syrian protesters. Yet it was more than that. It was also a carefully calculated method of discrediting the opposition.

The first rebels were nothing more than defectors from the Syrian Army who had refused to follow orders to shoot at their fellow citizens. Assad’s claim that these men were terrorists was ludicrous, and the international community called his bluff on it. But as the situation in Syria has been transformed, those claims have suddenly become much more credible.

As Assad was reinforced by his allies in Lebanon and Iran, and Islamic Extremists seeped in from neighboring Iraq, and from the wider Middle East. Slowly, but surely, the moderate opposition found themselves without a benefactor, and were increasingly sidelined.

Then came some increasingly disturbing reports about rebel actions. There were several reports of attacks using indiscriminant weapons of suicide bombings and attacks. Images surfaced showing rebels assassinating regime forces, and a video was circulated purporting to show a rebel eating the heart of a soldier.  Despite the infrequency of these occurrences, they have been exceptions portrayed as the norm.

Perhaps the most disturbed by these images were the moderate rebels themselves. The religious extremists could not care less how they are portrayed in the American media, and Assad’s forces were overjoyed at the ammunition for their propaganda war against the rebels.

But the moderate opposition has had the most to lose from these images. Since the early stages of the war, most international media has not differentiated between the rebel groups, and as a result the Free Syrian Army has been associated with horrific acts that it did not commit.

These perceptions have affected international observers as well. Polls have shown overwhelming opposition among the American (and European) public to intervention in Syria. They see this as a war between a ruthless dictatorship on one side, and the equally undesirable Al Qaeda forces on the other.

That has been Assad’s goal from the very beginning.  He has effected an intense public relations campaign to portray himself as the modern leader fighting an evil group of terrorists.  He has magnified every rebel misstep or wrongdoing, and in doing so has succeeded in preventing widespread western intervention.

The threat of Al Qaeda was credible enough to make American and European leaders question whether they should give aid to the rebels. After all, nobody wants Syria to end up like Afghanistan, where dangerous extremists were supplied by the Americans with advanced Stinger Missiles, still posing a threat today.

Western nations hesitated long enough that moderate rebels, under-funded and under-supplied, were sidelined in favor of extremists. In effect, the fear that ‘Islamists’ could increase in power indirectly led to that occurrence.

The FSA are not perfect by a long shot. Many of them are disorganized, and a few of them are no better than crooks. But the fact is that the vast majority of them have good intentions. If we continue to associate them with the extremists on the ground, then the moderates will continue to be sidelined. We must put our faith in those rebels who are genuinely fighting for a better future for Syria.

I went to an event recently where several FSA leaders spoke live via Skype. After hearing so much in the media about ‘how badly the rebels are losing the war,’ and how ‘extremists have taken over,’ I was surprised by how optimistic the FSA commanders still were. They still believe that they can win the war, and their hopes of establishing a free and stable democracy have not waned. If the commanders have not given up on fighting for democracy, then we have no right to give up on them either.