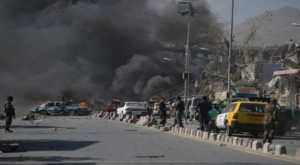 KABUL, Afghanistan (AA): Taliban militants in Afghanistan claimed on Saturday that a son of their supreme leader carried out a suicide attack in the southern Helmand province earlier this week, a claim rebuffed by the government.

In a string of tweets, Taliban spokesman Zabihullah Mujahid said that the son of supreme leader Mullah Hibatullah carried out a suicide attack in the Grishk district on Thursday.

Heavy fighting is going on in Helmand’s Grishk and Garmsir districts after the Taliban lost control of the Nawa district to government forces over a year after first overrunning it.

On Thursday morning, militants hit barriers at the security ring in the Girishk district with two explosive-laden armored vehicles, while the third was hit by security forces before it could reach its target.

One police officer was killed and five were injured.

Today the Taliban released pictures of the three attackers, but Akhundzada was not seen. Claims of his attack were made in separate notes.

Mullah Haibatullah took over the Taliban’s leadership after his predecessor, Mullah Akhtar Mohammad Mansour, died last year in a U.S. drone strike in Pakistan. The group’s ongoing annual offensives are named after Mansour.

“They lied, it is part of their propaganda, Taliban families and leaders are living lives of luxury in Pakistan and Qatar”, said Siddiq Siddiqi, director of the Government Media and Information Centre (GMIC).

In the latest updates, the Defense Ministry said 20 militants had been killed.

On Thursday, Afghan officials confirmed that 61 Taliban militants and 11 policemen had been killed as the Taliban fought to regain control of its lost territories in Helmand.

Lying south of the Taliban’s birthplace in Kandahar, Helmand produces most of the poppy plants in Afghanistan, and it remains one of the most insecure provinces, with militants controlling large swaths of land.

Imposition of Section 144 in Jamia Nagar Not Related to Action Against PFI, Says Delhi Police

AHMEDABAD -- The National Investigation Agency (NIA), along with Gujarat...