Shahid: The Witness of Injustice Killed by the System 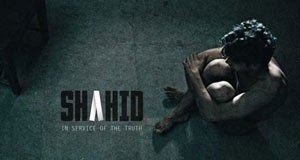 I met Shahid like in dream, just for a few hours in two days almost a decade  ago. I was perusing diploma in Journalism from Bharatiya Vidya Bhavan and living in Zakir Nagar area of New Delhi. I was following the news about Shahid in newspapers. The teenager who was booked under TADA was the youngest among those booked under the draconian law. When my friends informed me about his acquittal, we decided to receive him at the gate of Tihar Jail. And after 6-7 hours of waiting finally Shahid came out form gate no 6. We walked for a while, came on the road and took an auto-rickshaw for Zakir Nagar where some of his relatives lived.

When I was watching the movie ‘Shahid’ at a multiplex here yesterday the entire scene flashed back in my eyes.

It was around 8 pm when we reached Zakir Nagar. We had tea and biscuits together. After half an hour Shahid left for a relative. The next morning we ran into each other at the same tea shop. I asked Shahid about his future plan. He said he had already completed graduation behind the bars, now he would peruse career in journalism. Then we departed. Years passed by, then one day I came to know about advocate Shahid who was fighting for those who were falsely implicated in terror cases. Then in 2010 I heard about his sudden and painful murder.

When I came to know about the movie ‘Shahid’ I wanted to watch it at the earliest possible. The film is exceptional. It’s a slap on the entire system and provides a moment of  pause to look within.

The movie says Shahid was the counter product of saffron politics. We blame Shahid for his terror link, but what motivated him to cross LoC if he really did? This is the question which needs to be answered. We never think what instigated a teenager to take such a bizarre step — in real life though Shahid was acquitted of the charges. Are the demolition of Babri Masjid and anti Muslim riots of Mumbai not the reasons? How could the feelings of a teenager be pacified who saw Muslims being massacred by police and Shiv Sainiks together?

After the acquittal in real life, Shahid wanted to live a graceful life. But again he experienced the same systematic barbarism and brutality being meted out on Muslim youths in the name of war on terror. He tried to fight the injustice and got 17 innocent persons acquitted in seven years of his career. He did not charge those families who were not able to bear the ‘expensive justice’.

Shahid stood against the injustice and didn’t surrender till his last breath.

“By subjecting me to injustice, the Lord taught me the importance of fairness. By throwing pain, humiliation, and torture my way, he taught me to be strong.” These are the words which are voiced-over by the protagonist of the film ‘Shahid’ as the movie starts playing.

Shahid had to undergo the unimaginable form of torture and humiliation. But he overcame the torture and left the shadow of his dark past, and became the savior for those who were facing the same kind of humiliation and torture.

The satirical sentences with a bit of humor uttered by Raj Kumar Yadav (Shahid in the movie) are in fact the spontaneous overflow of emotions which reflect the reality of judicial system of this country. “Agar iska naam Donald ya Suresh hota, toh kya yeh yahaan khada hota (If this man’s name was Donald or Suresh, would he have been standing here)?” questions an emotional Shahid, in a Mumbai court room, addressing a judge, pointing to ‘Faheem Ansari’ who has been in prison without any proof or evidence for 28 months.

Unlike most of the Bollywood movies which are ‘masala packed’ and far from realities and real  life this movie has lots of spice of a common man and is bound to put lots of spice in the hypocritical legal system of the country which delivers the justice when it is too late.

In the end of the movie Shahid is shown to be gunned down in cold blood presumably for defending a 26/11 accused but the move is silent on who killed Shahid. Obviously Shahid was fighting against the system, which has nothing to do with gang wars of gangsters. So it was people of the ‘system’ who silenced  Shahid (the witness in Arabic).

This movie is the best tribute to late advocate and the real life hero ‘Shahid’. At the same time it puts some genuine question before the judicial system and gives a call to stop and retrospect.

Hats off to Hansal Mehta who made such a breathtaking and mesmerizing  movie with a cause.

Previous articleAh…Those were the times!
Next articleA Quiet Revolution Among India’s Muslims