Religious Official Cautions Against Rumors on Israeli Violations at Al-Aqsa 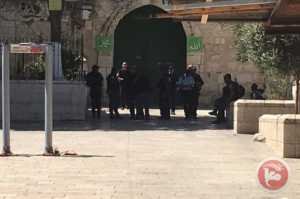 JERUSALEM (Ma’an) — The President of the Supreme Islamic Council in Jerusalem, Sheikh Ikrima Sabri, urged caution on Monday over reports alleging that Israeli forces had caused major damages inside the Al-Aqsa Mosque compound over recent days.

Israeli authorities shut down the Al-Aqsa compound for almost three days following a deadly shooting attack on July 14, only to reopen it after having installed increased security measures.

The Israeli move sparked widespread anger among Palestinians, who perceived the move as further infringement of Al-Aqsa, the third holiest site in Islam. After two weeks of protests in which six Palestinians were killed in clashes, the security measures were lifted completely after noon prayers on Friday.

Speaking to Ma’an on Monday morning, Sabri emphasized that the technical committee of the Islamic endowment (Waqf) tasked with examining the premises after the compound was occupied by Israeli forces was the only authority entitled to make statements about any damages or losses incurred since, urging media outlets to exercise caution when publishing new on Al-Aqsa.

Sabri’s comments came after Hassan Khater, the chairman of the International Jerusalem Center claimed that Israeli forces had seized important documents from the Waqf archives during the three days following the July 14 attack, adding that Israeli officers had been “moving freely between rooms, offices, archives, and documents after they evacuated worshipers, employees, and security guards from the compound.”

Palestinians have celebrated their successful protests around Al-Aqsa in the context of routine Israeli violations of Palestinian life and properties in East Jerusalem, which makes such victories seldom amid Israel’s continued occupation of the territory.

Meanwhile, others have pointed out that Israel continues to restrict millions of Palestinians from accessing the holy site through its annexation of East Jerusalem — a move never recognized by the international community — and its half-century occupation of the West Bank and 10-year siege on Gaza, which have forced Palestinians outside of East Jerusalem and Israel to obtain Israeli permits in order to pray at Al-Aqsa.

Many Palestinians in the West Bank and Gaza Strip who are unable to obtain Israeli permits have never been able to visit Al-Aqsa Mosque.