Rahul Gandhi Steps in to Resolve Infighting in Punjab Unit

Devastated by Fire at Their Delhi Camp, Rohingya Refugees Stare in the Dark

BEIRUT/GENEVA (Reuters): Rebels holed up in Aleppo can leave with their families if they lay down their arms, President Bashar al-Assad said on Thursday, vowing to press on with the assault on Syria’s largest city and recapture full control of the country.

The offer of amnesty follows two weeks of the heaviest bombardment of the five-and-a-half-year civil war, which has killed hundreds of people trapped inside Aleppo’s rebel-held eastern sector and torpedoed a U.S.-backed peace initiative.

Fighters have accepted similar government amnesty offers in other besieged areas in recent months, notably in Daraya, a suburb of Damascus that was under siege for years until rebels surrendered it in August.

However, rebels said they had no plan to evacuate Aleppo, the last major urban area they control, and denounced the amnesty offer as a deception.

“It’s impossible for the rebel groups to leave Aleppo because this would be a trick by the regime,” Zakaria Malahifji, a Turkey-based official for the Fastaqim group which is present in Aleppo, told Reuters. “Aleppo is not like other areas, it’s not possible for them to surrender.”

Washington was also sceptical of government motives: “For them to suggest that somehow they’re now looking out for the interests of civilians is outrageous,” White House spokesman Josh Earnest said, citing the heavy civilian toll from air strikes and bombardment.

The army announced a reduction in shelling and air strikes on Wednesday to allow people to leave. It backed that up with an ultimatum: “All those who do not take advantage of the provided opportunity to lay down their arms or to leave will face their inevitable fate.”

The government also sent text messages to the mobile phones of some of those people trapped in the besieged sector, telling them to repudiate fighters in their midst. More than 250,000 people are believed to be trapped inside rebel-held eastern Aleppo, facing dire shortages of food and medicine.

Speaking to Danish television, Assad said he would “continue the fight with the rebels until they leave Aleppo. They have to. There’s no other option.”

He said that he wanted rebels to accept a deal to leave the city along with their families and travel to other rebel-held areas, as in Daraya. Neither Assad nor his generals gave a timeline for rebels to accept their offer.

Washington accuses Moscow and Damascus of war crimes for intentionally targeting civilians, aid deliveries and hospitals to break the will of those trapped in the besieged city. Russia and Syria accuse the United States of supporting terrorists by backing rebel groups.

A U.S. official, speaking on condition of anonymity, said that the relentless Russian and Syrian bombardments could result in the fall of rebel-held eastern Aleppo within “weeks if not days”.

“It’s unclear how long they will last, but considering the destruction of infrastructure that supports life, they are hanging by a thread,” the U.S. official said. “There is only so much they can endure.

The war has already killed hundreds of thousands, made half of Syrians homeless, dragged in global and regional powers and left swathes of the country in the hands of jihadists from Islamic State who have carried out attacks around the globe. 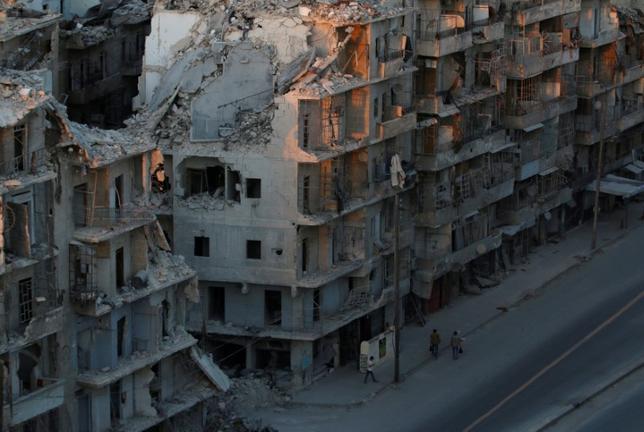 The United States and Russia are both fighting against Islamic State but are on opposite sides in the wider civil war, with Moscow fighting to protect Assad and Washington supporting rebels against him.

Storming Aleppo’s rebel-held zone, which includes big parts of the densely populated Old City, could take months and cause a bloodbath, the U.N. Syria envoy warned on Thursday.

“The bottom line is in a maximum of two months, two and a half months, the city of eastern Aleppo at this rate may be totally destroyed,” said Staffan de Mistura, invoking the 1990s atrocities of the Rwandan genocide and Yugoslavia’s civil war.

Residents of eastern Aleppo said the aerial bombardment was significantly lighter overnight and on Thursday after the government’s statement, but they said heavy fighting continued on the frontlines and people were afraid.

The army and its allies, Iran’s Revolutionary Guards and Shi’ite militias from Iraq and Lebanon backed by Russian air power, seized half of the Bustan al-Basha quarter of Aleppo, north of the Old City on Thursday, the Syrian Observatory for Human Rights, a war monitor, reported.

“The bombardment decreased a lot in the eastern districts, but there’s a sense of foreboding … people are still scared. And because there’s still the siege, there’s nothing at all in the shops,” said Ibrahim Abu al-Laith, a Civil Defence official in eastern Aleppo.

Amir, a resident of the rebel-held district who did not want to be identified with his family name, said it was true that air strikes had diminished, but that he had not yet seen any way for civilians to leave the area. “It’s not true that there are safe crossings,” he said.

Residents in eastern Aleppo forwarded to Reuters text messages they said had been sent by their telecom provider carrying a government warning urging them to distance themselves from rebels and to depart.

“Our people in Aleppo: save your lives by rejecting the terrorists and isolating them from you,” read one message. “Our dear people in the eastern districts of Aleppo! Come out to meet your brothers and sisters,” read another.

Meanwhile, rebels continued the shelling of residential areas of government-held western Aleppo, where dozens of people have also been killed since the end of a ceasefire two weeks ago. The Observatory said 10 people were killed 52 wounded in government-held areas of Aleppo city by rebels on Thursday.

The government-held western districts of the city are still home to more than 1.5 million civilians who face far less daily danger than in rebel-held areas. Video footage obtained by Reuters showed people in the city enjoying a night club in the Seryan district, while war rages in the east.

Russia says it is targeting the Nusra Front, al Qaeda’s Syrian branch which changed its name in July and says it broke ties with the network founded by Osama bin Laden.

The U.N. envoy De Mistura on Thursday urged Moscow and Damascus to accept a deal under which the fighters of that group would leave the city, while other insurgents and civilians would be allowed to remain.

He said there were fewer than 1,000 members of the hardline Islamist group inside Aleppo, part of a contingent of around 8,000 rebel fighters, and offered to lead them out of the city himself to guarantee their safety.

Russian presidential envoy Mikhail Bogdanov said it was “high time” such an offer was made, but it was not immediately clear if Moscow was also willing to stop the bombing.

A U.S. State Department official said he could not confirm De Mistura’s estimate of less than 1,000 Nusra fighters in Aleppo, though he said Washington believed the group’s adherents were a minority of the opposition fighters in the city.

“We’re not able to verify that that’s accurate,” the official told reporters on condition of anonymity.

Asked if De Mistura actually carried out his proposal to escort the fighters out of Aleppo it might simply make it easier for Syrian forces to take the city because some of their most effective opponents would have been removed, the official replied: “potentially.”

Distinguishing between fighters from the former Nusra Front and other groups has been difficult in the past, including during the week-long ceasefire which collapsed last month when the army launched its offensive.

Russia accused the United States of failing to ensure that other rebels separated themselves from Nusra, which Moscow and Washington both regard as a terrorist group excluded from the ceasefire.

Russian President Vladimir Putin will visit Paris on Oct. 19 to discuss Syria with his French counterpart Francois Hollande, the only diplomatic track still active over efforts to bring peace to the country.

In his Danish TV interview, Assad accused Washington of using Nusra as a proxy, and said this was why the ceasefire had collapsed.

“It’s an American card. Without al-Nusra, the Americans cannot have any real, let’s say, concrete and effective card in the Syrian arena,” he said.