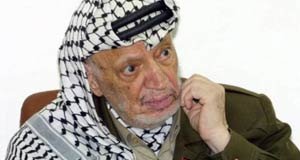 RAMALLAH, Nov 13 — The findings of Swiss scientists probing Yasser Arafat’s death, which shows high level of a radioactive substance in the former Palestinian leader’s remains, will be internationalize, a senior official said Tuesday.

“The next expected moves include moving the file of Arafat’s death to the UN Security Council and the General Assembly,” Palestinian chief negotiator Saeb Erekat told Xinhua, adding that “the file will also be taken to the international high court of justice in the Hague”.

He said that this was a agreement made between the Palestinian leadership and the Arab League. “It was agreed that in case the results of testing the samples from Arafat’s body are announced, the file will be internationalized,” Erekat said.

Last week, the Qatar-based Aljazeera TV reported that Swiss scientists found at least 18 times the normal levels of radioactive polonium in the tested samples taken from Arafat’s remains, adding that they were confident that up to an 83 percent level that Arafat was poisoned with it.

Swiss, Russian and French scientists opened Arafat’s grave and took sample from his body one year ago. The results were announced in a 108-page report showing that Arafat’s death was not natural, and that he certainly died of being poisoned by radioactive polonium.

“President Mahmoud Abbas, who visited Egypt this week, discussed with the Egyptian and Arab leaders the possibilities of internationalizing the file of Arafat’s death,” said Erekat.

“It was agreed to send different security and medical committees soon to the Arab League in Cairo to debate the issue.”

Erekat added that during his meeting with US Secretary of State John Kerry, Abbas requested the US not to object the Palestinian decision turning to the Security Council to obtain an international resolution for investigating Arafat’s death.

“We will focus only on how Arafat died, and how he was killed and who killed him,” said Erekat, adding “because the French, Swiss and Russian scientists knew how he died, but we will ask the international organizations to help us find who exactly killed our Palestinian leader”.

Arafat, chairman of Palestine Liberation Organisation and the founder of Fatah movement, died at the age of 75 in a French Hospital in November 2004.–IANS