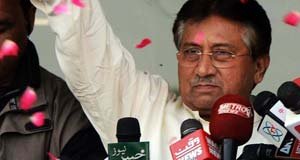 This is the first time in Pakistan’s history that a former president will face high treason trial.

The Law Ministry will submit the government request to the top court as the first step to initiate the proceedings, Xinhua reported.

Interior Minister Chaudhry Nisar Ali Khan had announced Sunday that the government would formally put the former military ruler on trial on high treason charges for imposing emergency rule in 2007.

Musharraf took power in a bloodless coup in 1999 and suspended the constitution when he declared emergency in 2007.

The interior minister said that investigators have collected solid evidences against Musharraf and a report would also be submitted to the Supreme Court.

The interior ministry said in a letter that Musharraf violated the constitution by imposing emergency rule in the country in November 2007 and that the government decided to initiate a high treason case against him.

This letter, requesting the setting up of a tribunal of three high court judges to try Musharraf, will be sent to the Supreme Court by the law ministry.

“A trial needs to take place as soon as possible with a special court hearing the case,” the letter said.

The case can only proceed after the judges are appointed by the Supreme Court, which had observed in May that the treason case against the former military ruler would be heard by a special court.

In June, Prime Minister Nawaz Sharif announced in his speech to the National Assembly, less than three weeks after his PML-N party won majority in the general elections, that his government would begin the high treason trial of Pervez Musharraf. –IANS

Previous articleSigns of a Police State Are There for Everyone to See
Next articleMohammed: Next 7 Years To be Crucial for UAE