'Where is UPA?': Mamata Takes Jibe at Congress, But Moots Opposition Unity

Hyderabad's Sunday-Funday Event Called Off in View of Omicron Concerns 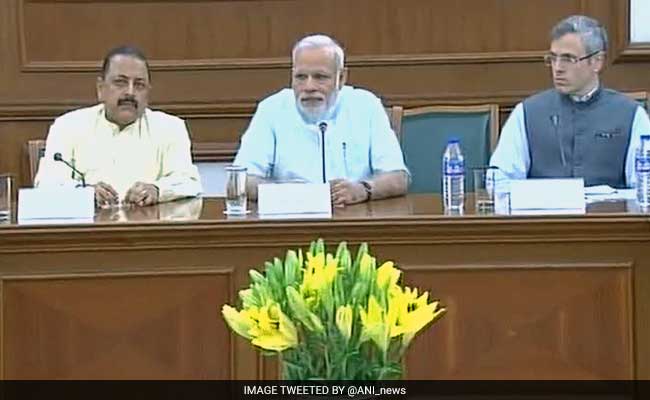 NEW DELHI (PTI):  A joint delegation of opposition parties led by former Jammu and Kashmir Chief Minister Omar Abdullah today called on Prime Minister Narendra Modi and apprised him of the ground situation with an appeal to adopt a political approach in dealing with the unrest in the Valley.

The situation in the Valley, which continues to remain under curfew for the last 45 days, prompted all the opposition parties in the state, cutting across party lines, to join hands and request the Centre for initiating a political dialogue in the state.

Besides Omar, the delegation — comprising a seven-member team of state Congress led by its PCC chief GA Mir, CPM MLA MY Tarigami, eight-member team of main opposition National Conference including its provincial chiefs Nasir Wani and Davinder Rana — has been camping in the national capital and meeting political leaders from the government and opposition.

The delegation submitted a memorandum to the Prime Minister, expressing its anguish, grief and sorrow over the painful loss of lives in the Valley and to express “dismay at the lack of a political approach to deal with the situation.”

The delegation apprised the Prime Minister that the tried and tested formulations of dealing with the political issue in Kashmir administratively rather than politically has further exasperated the situation and “created an unprecedented sense of disaffection and disenchantment”, especially among the youth.

“We are of the firm opinion that the Central Government should waste no further time in initiating a credible and meaningful political dialogue with all stakeholders to address the unrest in the state,” the memorandum said.

The delegation said, “continued failure to address the unrest in Kashmir will further deepen the sense of alienation” and hoped that the Prime Minister “will take immediate measures to address this grave situation.”

Flagging the issue of continued protests in which many youths have fallen victim to the ongoing protest, the memorandum requested the Prime Minister to announce “an immediate ban on pellet guns that have caused grievous injuries in the current unrest and maimed and blinded many young boys and girls”.

“We also request you to advise relevant quarters against the policy of mass harassment, raids and arrests as this has worsened an already volatile situation in the state and goes against the values and principles of our democratic fabric and ethos,” the memorandum said.

The delegation started the political initiative on Saturday when it met President Pranab Mukherjee and submitted a memorandum, requesting him to use his office to influence the Centre for initiating a political dialogue with all stakeholders in the state.