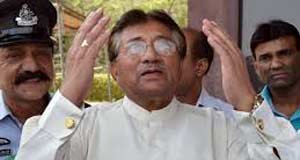 ISLAMABAD, Jan 3 — Former Pakistan president Pervez Musharraf, who was admitted to a military hospital following a heart problem Thursday, might require to undergo angioplasty or bypass surgery, a media report said on Friday.

Musharraf’s three heart vessels are blocked and he would either require an angioplasty or a heart bypass, Dawn online quoted sources in the medical board that examined him as saying.

The options of his treatment in Dubai or London were also being considered, the report said.

After failing, for the second time in 10 days, to appear Wednesday in the special court formed to try him on charges of high treason, Musharraf was being taken to the court Thursday when he complained of a “heart problem” and was then shifted to the Armed Forces Institute of Cardiology (AFIC) in Rawalpindi.

Musharraf was undergoing extreme mental stress which led to the chest pains and his current medical condition, the Dawn report said.

He is currently being administered blood-thinning medication.

No official statement has been issued by the army-run hospital about Musharraf’s condition so far.

According to media reports, the option of shifting Musharraf abroad for treatment was under consideration but a decision in this regard would be taken only after his medical report is made available by the hospital.

Meanwhile, a petition was filed in the Islamabad High Court Friday to prevent the former army ruler from going abroad for medical treatment.

Petitioner Haroon Rasheed requested the court to instruct the interior ministry to ensure that the best medical facilities were made available to Musharraf and he should not be allowed to go abroad.

Haroon Rasheed is the son of Ghazi Abdul Rashid, cleric of Islamabad’s Lal Masjid who was killed in a security operation in 2007 when Musharraf was the president.

Musharraf’s name is still on the list of those people who cannot go abroad without the government’s permission. A court has already turned down his request to remove his name from the Exit Control List (ECL) and advised him to approach the government.

But Minister of State for Education Muhammad Baligh-ur-Rehman said Friday that the government could not remove Musharraf’s name from the ECL, reported the Associated Press of Pakistan (APP).

Talking to the media outside Parliament House, he said the court was the appropriate authority to remove the name of the former military dictator from the Exit Control List.

Prime Minister Nawaz Sharif announced in June the high treason case against the former military chief would be initiated for suspending the constitution.

Musharraf took over in a bloodless coup when he dismissed the government of Nawaz Sharif in 1999.

The 70-year-old currently lives in his farmhouse in Islamabad after getting bail in three high-profile cases, including the 2007 assassination of former prime minister Benazir Bhutto.

Musharraf, who stepped down in 2008 and went into exile, returned to Pakistan in March 2013 to contest in parliamentary elections. However, a court disqualified him from standing in the May 2013 elections, which his bette noire Nawaz Sharif won.–IANS