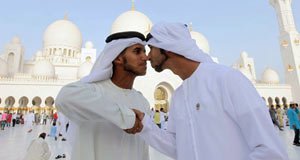 ABU DHABI—  Monday is the first day of Eid Al Fitr, as Sunday was the last day of Ramadan, the UAE Moon Sighting Committee has announced.

The committee, headed by Sultan Bin Saeed Al Badi, Minister of Justice, said that after a number of legitimate measures, as well as several contacts with neighbouring countries, it was established that Sunday was the last day of Ramadan, and Monday is the first day of Shawwal, marking the first day of Eid Al Fitr in the UAE.

They also congratulated Their Highnesses Members of the Supreme Council and Rulers of the Emirates, General Shaikh Mohammad Bin Zayed Al Nahyan, Abu Dhabi Crown Prince and Deputy Supreme Commander of the UAE Armed Forces, and Crown Princes and deputy rulers, as well as the people of UAE and Arab and Muslim nations.–Wam