Media Hides More Than It Reveals [dropcap]J[/dropcap]IM Morrison said, ‘Whoever controls the media, controls the mind.’ In today’s day and age where media permeates every aspect of life this is especially true. Be it print media, news channels or web based news, what we see and hear in the media affects our thoughts, and to some extent, even our behavior. Revolutions have been brought about and governments been toppled over what has been portrayed in the media.

During the harrowing days of India’s independence struggle, it was newspapers and journals such as the Bengal Gazette, Amrit Bazaar Patrika, Harijan and the like which helped keep the nationalist fervor alive among the people and eventually led to a country-wide uprising against the British Raj.

Despite facing numerous hurdles and being heavily persecuted by the East India Company, the Press succeeded in uniting India, regardless of borders, religions and ethnicities.

While the Indian news media has a glorious history, its present state of affairs is disturbing, to say the least. The media has an overall stated objective of presenting unbiased fair news free from prejudice and provide the public with an honest view of the matter.

However, with the emergence of news conglomerates that have stakes in various media networks and control the content of news, the objective has shifted from providing free and fair stories to increasing TRP’s. News organizations have turned into businesses that only look at profit margins and are willing to go to any lengths to achieve them.

The fear that the viewer may change the channel with the click of a button leads to scandalous stories on a repetitive loop, using graphics and other technology to up the drama quotient and using news presenters who are overly animated and can retain the audience’s attention.

In a town somewhere in Madhya Pradesh, farmer Biharilal’s daughter Chayya sat glued to the TV screen, taking in the graphics and amateur video game imagery put together by vernacular news channels that claimed that the experiment at CERN, the European Centre for Nuclear Research, to unlock secrets of the universe using the hadron collider would bring about the end of the world. An agitated Chhaya committed suicide fearing the experiment’s cataclysmic outcome.

Sensationalism has become the order of the day where important social and political issues are ignored and news channels prefer devoting a large amount of coverage to outrageous and inconsequential stories or exaggerating facts that may lead to harm.

What is even more disturbing is that the audience laps this up without sparing a thought for its authenticity or the issues of immediate significance.  Another glaring drawback of the media is the way tragic incidents and crises are covered. A certain amount of maturity and tact is required to approach victims and convey their pain and devastation to the public without being insensitive and intruding on the victim’s privacy.

At the same time, one must be able to put across the gravity of the incident and the preceding events which led to it. Many a time, even tragic and sensitive situations are sensationalized in the news in a gross violation of human decency. The scene of a reporter shoving the mike in a harried victim’s face and bombarding him with questions even as he or she’s trying to get his bearings is, unfortunately, quite common.

Another significant duty of the media is objective reporting during political campaigns, providing information to the electorate about the political parties, their programs and candidates.  Emerging as a potentially powerful force, electronic media has also been playing a similar role to that of print media in conducting free and fair elections.

As the field of media becomes increasingly dominated by conglomerates, some such organizations tend to influence the content of news so as to favor their preferred candidate. This leads to the viewers receiving inherently biased facts which in turn causes them to make an uninformed decision. 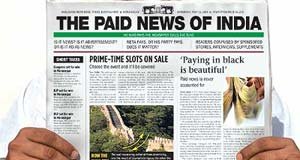 For instance, in the current scenario, the Indian media has been unabashedly supportive of Narendra Modi for the Prime Minister’s job in the upcoming elections. While Modi himself has a very adept, massive media management machine in place, the Indian media has gone one further by managing his campaign through a live blog of his rallies across the nation. Although the alternative Congress candidate Rahul Gandhi does not seem to be excessively promising, the open media support extended to the BJP’s prime ministerial hopeful in a vibrant democracy like India is nonetheless brazen and in-your-face.

Some even go to the extent of suitably “editing” stories about political candidates to favor one and harm the other. They tend to air some parts of a candidate’s speech while ignoring others or even piecing together parts of a speech to make it appear poles apart from the original. Showering undue coverage on a chosen candidate is another practice of news media.

In the race to compete and survive in such an environment, promising journalists have begun to report scandalous and sometimes false stories to gain popularity. As Aijaz Zaka Syed writes, “Increasingly, you see that journalists, after long proximity to power, end up developing delusions of power. Seems absolute power doesn’t merely corrupt the powerful; it also corrupts those around them.” Many journalists have no qualm in exaggerating a story or altering facts as they believe they can get away with it.

Of late, progressively common among the news channels is the phenomenon of paid news. Blatant misuse of print and electronic media by parties and candidates contesting the general elections came to light during elections in 2004 and 2009. The journalists became news “managers” succumbing to pressure from media executives

Outright support to political players is prevalent even among established newspapers in the country. The Hindu has been open about its ideological leanings and doesn’t shy away from being seen as a paper left of the center. It is controlled by the Kasturi & Sons group which has been sympathetic to the CPM. In order to support and further the preferred political party’s goals, newspapers may present information lacking legitimacy or give excessive coverage to the party to influence the readers.

As the citizen of a thriving democracy and a passionate believer in the virtuous duty of the media, one is deeply disappointed by the eroding values and artificial perceptions rampant in the Indian media. Perhaps it’s time for another revolution; one by the people to bring about a new and right media.

Shahwar Fatima Syed is a journalism student and has been working as a trainee journalist with Clarion India.  She wrote the above article as part of a national essay contest conducted by the Indian Institute of Journalism and New Media, Bangalore for Aspiring Journalists in which it won the First prize.