LONDONERS GIVE A BEFITTING HOSTILE RECEPTION TO TRUMP

Such was the atmosphere in the city that Friday being a working day many of those who could not participate in the demonstration borrowed placards from the passers-by protesters and took selfies with them. At Finsbury Park Tube Station I saw a group of women of different ages holding anti-Trump placards and singing in a chorus.

Earlier in an interview to the Sun, Trump had said that he felt unwelcome in Britain. “I used to love London as a city,” he said. “But when they make you feel unwelcome, why would I stay in there? And when I say that I am talking about government because the people of the UK agree with me.” If the ‘most insensitive’ politician who happens to be the President of the most powerful country had felt being unwelcome by watching, reading and hearing hostile sentiments  then he should look at the cartoons and placards the demonstrators carried with them during the demonstration. The placards used as rude a language as calling him a “wet fart”. The fact, however, is that, Trump has no one but to blame himself for the belligerent reception he has earned.

Who on earth an intelligent, cultured or even an uncouth person not to say a nation would ever insult their host and expect in return a warm welcome? Violating basic decency and diplomatic norms he berated the British Prime Minister Theresa May when he complimented his Islamophobe friend, the former Foreign Secretary Boris Johnson, saying that he would make “a great prime minister” because he’s got what it takes”. 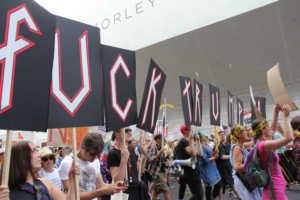 Giving vent to his Islamophobia he attacked Sadiq Khan and said, “Take a look at the terrorism that is taking place. Look at what is going on in London. I think he has done a very bad job on terrorism.

“I think he has done a bad job on crime, if you look, all of the horrible things going on there, with all of the crime that is being brought in.” 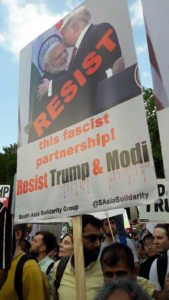 This is not the first time when Trump has made such comments on Khan. Following a terror attack in London, June last year, he had tweeted saying, “At least 7 dead and 48 wounded in terror attack and Mayor of London says there is “no reason to be alarmed!”

Suggesting that Trump had singled him out for criticism because he is a Muslim, Sadiq Khan has  said, “We unfortunately last year lost 14 people because of these terrorists. Manchester lost 22, cities across Europe from Nice to Paris to Berlin to Brussels have lost many, many more people because of the acts of  the terrorists — we stand united against them. It’s for President Trump to explain why he has singled me out for being responsible for these acts of terrorism and no other mayor or no other leader.”

Trump also angered British doctors by saying that a central London hospital has “blood all over the walls and floors.” Several doctors, patients and politicians, in response took to Twitter to express their anger at Trump’s attack on UK’s National Health Service (NHS). 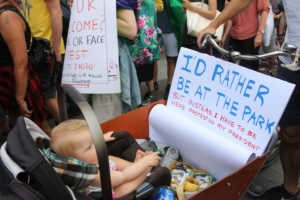 Addressing the rally Labour Party Leader and a known anti-war campaigner said: “When somebody, on a global state, condemns Muslims because they are Muslims, it’s not acceptable.

“Fundamentally the message that goes out from London today … to our visitor is we are united in our home… for justice not division.”

Earlier in a video recorded statement, Corbyn had said: “Theresa May has invited President Trump to this country at a time when his dangerous and inhumane policies are putting the lives and the well-being of billions of people at risk…But the Tories are rewarding President Trump with a red-carpet welcome. All the while he is threatening the whole world with launching a trade war after he has pulled out of the Paris climate change agreement and now is trying to pull out of the very important Iran nuclear deal, while he repeatedly tramples upon the most basic fundamental human rights that all of us hold dear as a divine duty, by separating minor children from their parents and locking them up in cruel and inhumane conditions deprived of any affection of whatsoever.” Free distribution newspaper Evening Standard carried Trump’s photo on its front page with a headline, “TRUMP TAKES AIM AT LONDON, ATTACKS OUR NHS AND INSULTS NEWCOMERS WHO’VE MADE OUR CITY THEIR HOME, WE SAY NO, MR PRESIDENT”. 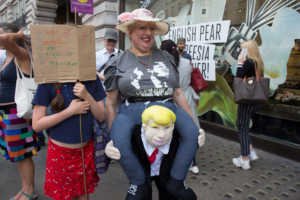 In its editorial headlined, “It’s time for Britain to say: No, Mr President” the paper said, “On every level, Mr Trump is wrong. He is ungracious, ill-mannered, boorish, ignorant, bigoted, bullying and—with the damage he is doing to the western alliance and global free  trade—he is a danger.”

London based human rights organisation South Asia Solidarity Group carried a big poster of Modi and Trump embracing each other with a caption, “Resist this fascist partnership! Resist Trump & Modi.