[dropcap]H[/dropcap]is name is Omran Daqneesh. The image of him, bloodied and covered with dust, sitting silently in an ambulance awaiting help, is another stark reminder of the toll of the war in Syria.

He is young — one witness puts him at five years old, as old as the Syrian war itself. But his chubby arms and legs and the way he clings to the man who pulled him from the rubble of his bombed-out home suggest he is younger, maybe still a toddler.

The bloodied boy sits and waits for medical attention. An Aleppo Media Center activist told CNN that Omran did not cry at any point during the rescue and appeared to be in extreme shock.
It took nearly an hour to dig Omran out from underneath the rubble, an activist told CNN. He and other rescuers used flashlights to bring out several people trapped beneath the bombed-out building. 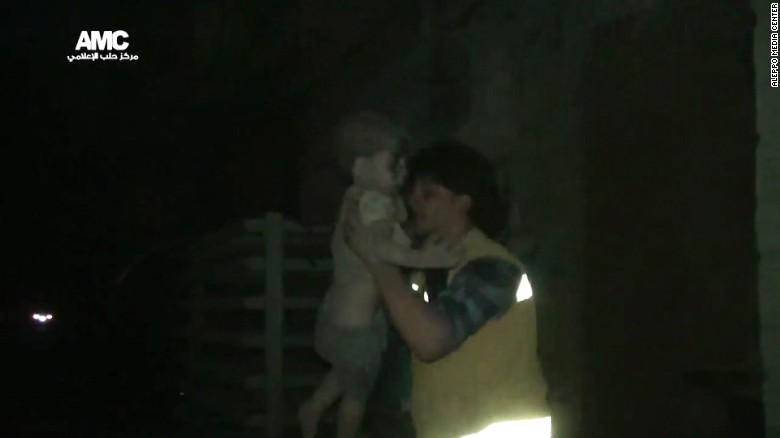 A civil defense worker carries Omran into the ambulance. The airstrike destroyed Omran’s home, where he lived with his parents and two siblings. All survived.

Syria is now in its fifth year of civil war, with the Syrian Center for Policy Research estimating the death toll at a staggering 470,000. Aleppo may be one of the hardest-hit cities. Mustafa al Sarouq, the cameraman who filmed the video of Omran, told CNN’s Nima Elbagir: “The truth is that the image you see today is repeated every day in Aleppo.”
An Aleppo Media Center activist told CNN that Omran did not cry at any point during the rescue and appeared to be in extreme shock.
It took nearly an hour to dig Omran out from underneath the rubble, an activist told CNN. He and other rescuers used flashlights to bring out several people trapped beneath the bombed-out building.
He and his family were injured when their house was destroyed by an airstrike Wednesday. Miraculously, everyone in his immediate family survived. Activists blame the Syrian regime and Russia for the bombings.
Aleppo, in northern Syria, has been besieged for years during that country’s civil war. Thousands of people have been killed there, including 4,500 children, and many lives have been upended.
Omran’s family is among them.

The haunting, heartbreaking video of Omran, posted by the Aleppo Media Center, has been circulating on social media.
It shows a civil defense worker carrying the little boy to an ambulance. His cartoon character T-shirt is covered in dust, the left side of his face is bloody. He is silent despite the cacophony around him. He was not crying at any point during the rescue.
“He was in extreme shock,” according to a spokesman for the Aleppo Media Center, an activist group. He looks dazed as he sits on the vehicle’s orange seat, his hands on his lap, as he waits to be treated, as he waits for somebody to help him.
He raises his left hand to his eye and feels the area around his temple as if he has been hit there. He wipes his face and looks down at the blood.
But Omran has had a lucky escape — he appears to have been one of the first pulled out of the rubble before his parents, the Aleppo Media Center says.

“The truth is that the image you see today is repeated every day in Aleppo,” said Mustafa al Sarouq, a cameraman with the Aleppo Media Center, who filmed the video. He spoke to CNN’s Nima Elbagir via Skype.
“Every day we cover these massacres and these war crimes in Aleppo. When we go to the places that have been bombed, regime planes circle around and bomb it again to kill rescue workers that are helping civilians. They kill these people who are trying to rescue people.”
It took nearly an hour to dig Omran out from underneath the rubble, an activist tells CNN. He and other rescuers used flashlights to bring out several people trapped beneath the bombed-out building. Video from the night scene shows another little boy, even younger than Omran, being placed on a stretcher on the same ambulance. A third shell-shocked man stumbles out of the collapsed building and walks into the ambulance. Omran has now been released from the hospital.
The doctor who treated him said his injury was light compared to the others wounded in the bombing. He was discharged after two hours.
“Omran was in the same daze and shock you saw he had when he was in the ambulance,” said Dr. Mohammedd, a surgeon in Aleppo, who doesn’t want to use his last name for security reasons. “He was in the same situation, he did not cry at all.”
His mother and brother, who were seriously injured, were smuggled out of Aleppo, and the family is now staying with relatives, the activist tells CNN.

On Wednesday, three more people died and at least 12 others were wounded in the rebel-held al Qaterchi neighborhood in eastern Aleppo, according to the UK-based Syrian Observatory for Human Rights and the Aleppo Media Center. One of those killed is believed to be a relative of Omran’s family.
More than 18,000 civilians have been killed in Aleppo province from March 15, 2011 through August 18, 2016, according to the Syrian Observatory for Human Rights.
More than 4,500 of those killed were children under the age of 18, the Observatory said Thursday, after the video of Omran went viral.
“The whole world is silent to these crimes in Aleppo against women and children,” said Sarouq.
“There are thousands of children like Omran who are being bombed daily, killed daily… Everyday this city is hit with every type of weapon, with every type of crime. The living conditions are terrible. The only route out of the city is totally unusable, it is shut. We call on the whole world this regime and these militias that are killing children and specifically the children of Aleppo. These crimes must be stopped in Aleppo.”

Some 1.5 to 2 million people still remain in Aleppo, once considered Syria’s largest city. It is now divided into rebel-held and government-held areas. Those still there face a terrible choice.
Should they stay in a city subjected to relentless bombing and risk their lives and those of their children?
Or embark on a perilous journey across the sea, and endanger the lives of their families?
Last year another image of a Syrian boy, just 2 years old, blew up social media.
The photo of Alan Kurdi’s body lying on a Turkish beach galvanized the world and became a symbol of the migrant crisis in Europe.
A Sudanese artist based in Doha, Qatar, captured the two stories that symbolize the suffering of millions into one heart-wrenching image.
View image on Twitter 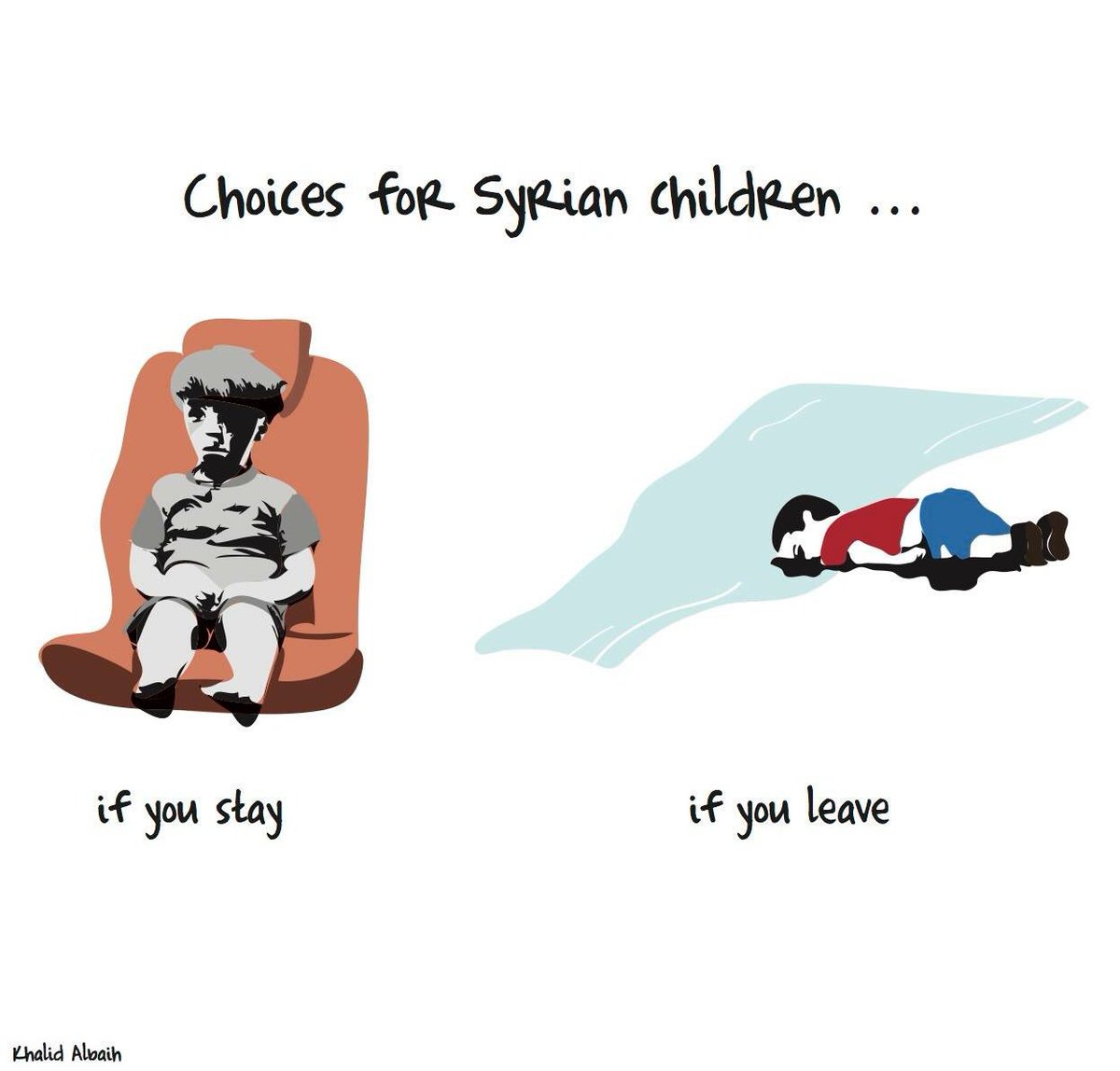 “The picture describes two scenes from different time periods, but the same war and struggle of Syrian people and refugees of war all over the world,” Khalid Albaih told CNN.
“Omran who was pulled from under the ruins after a Russian air strike in Aleppo and also of Alan who drowned in the Mediterranean.”
Asked what inspired him to draw the pictures, Albaih said: “My inspiration came from the fact that I consider myself a refugee. My children are within the same age and could also be in the same situation.”

Hope is far from reach for Omran and thousands of others like him.
The United Nations has been forced to halt nearly all aid deliveries in Syria, faced with the escalating fighting.
“In Syria, what we are hearing and seeing is only fighting, offensives, counter-offensives, rockets, barrel bombs, mortars, hellfire cannons, napalm, chlorine, snipers, airstrikes, suicide bombers,” said UN envoy Staffan de Mistura told reporters in Geneva.
“Not one single convoy in one month has reached any of the humanitarian besieged areas. Not one single convoy. And why? Because one thing, fighting.”
He abruptly cut short a meeting of the UN humanitarian task force in protest of the violence.
Mistura has attemped to increase pressure on the US and Russia, the task force’s co-chairs, to help produce a 48-hour ceasefire in Aleppo.
On Thursday, Russia said it is ready to support that call from the UN Special Envoy to halt the violence in Aleppo to allow for the distribution of humanitarian aid.
“Coming from the international principles of humanitarian law and with intention to extend the scales of humanitarian mission in Aleppo, Russian Defense ministry is ready to support de Mistura’s proposal about weekly 48 hour humanitarian ceasefires to deliver the city’s citizens food, medicine and to restore vital service systems that got broken in rebels’ shellfire,” Russian Defense Ministry spokesman Igor Konashenkov told Russian media.
He said the dates and times of the humanitarian convoys will be set after Russia receives security guarantees from the United States.
Syria and Russia announced in late July the opening of humanitarian corridors for people to flee Aleppo, but many residents stayed in the city, fearing the corridors were not safe. De Mistura said introducing such measures should be left to the UN and its partners, and said that no one should be forced to leave.

Meanwhile, more details of the suffering in Syria are highlighted by Amnesty International.
How to help Syrian refugees
Using survivors’ accounts, the Amnesty report details the harrowing conditions for inmates and the brutal methods of torture including rape, sexual violence, flogging, burning and scalding.
UNICEF, the UN children’s agency, estimates 8.4 million children are in need of humanitarian aid in Syria and neighboring countries.
What it’s like inside Syria’s prisons

“World has failed the Syrian People”

The UN’s deputy secretary-general said he hoped Omran’s story and image would get to people’s hearts and brains.
“I think the whole world has failed the Syrian people,” said Jan Eliasson, speaking on CNN’s “Amanpour.” Thursday.
“I think this is an illustration of the huge tragedy that the Syrian people are going through. We talk about this often as this being a nightmare. This is worse than a nightmare because you wake up from a nightmare. But in Syria they wake up to constant nightmares.”
He called Syria one of the most frustrating conflicts in the world.
“This is like an infected wound in world politics,” Eliasson said. “We’ve got to end this war.”