Iran Nuclear Talks Close in on Deal as Israel Lashes Out 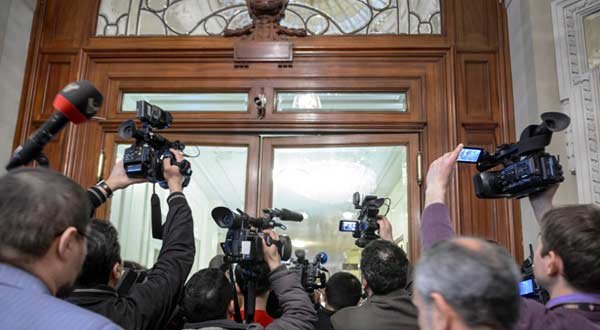 LAUSANNE – Iran and world powers have reached tentative agreement on parts of a deal sharply curtailing Tehran’s nuclear programme, Western diplomats said Sunday while cautioning a deal is by no means done.

As negotiators in Switzerland raced against the clock, Israeli Prime Minister Benjamin Netanyahu launched a blistering attack on the “dangerous” accord that may be emerging.

One Western diplomat said Iran had “more or less” agreed to slash the number of its centrifuge machines by more than two-thirds from 20,000 to 6,000 and to ship abroad most of its stockpile of nuclear material.

A senior Iranian negotiator, however, denied the comment saying such claims were aimed at “disturbing” the talks.

Iran´s chief negotiator Abbas Araqchi said late Sunday, as Britain´s Philip Hammond became the final major power foreign minister to arrive in Lausanne, that its stocks would not be exported.

But at the same time Iranians have expressed guarded optimism that after 18 months of tortuous negotiations and two missed deadlines, a breakthrough might be in sight for a deal ending 12 years of tensions.

“Getting to an accord is doable. Solutions have been found for numerous questions. We are still working on two or three issues… The talks are in their final phase and are very difficult,” Abbas told reporters in Lausanne.

US Secretary of State John Kerry, locked in talks since Thursday with Iranian Foreign Minister Mohammad Javad Zarif, cancelled plans to leave, as did their German and French counterparts.

Aim of the game

The aim is to agree broad outlines for an accord by Tuesday´s midnight deadline, and then flesh out a series of complex annexes containing all the technical details by June 30.

The mooted deal would see Iran scale down its nuclear programme and allow unprecedented inspections of its remaining activities.

The hope is to prolong the theoretical “breakout” time that Iran would need to produce enough fissile material to build a nuclear bomb to at least a year from the current estimate of several months.

This would require a combination of slashing the number of centrifuges, converting existing nuclear plants such as the underground Fordo facility, exporting its stocks of enriched uranium and limiting the development of newer, faster equipment.

This last issue is thought to be a particularly thorny issue, as is the issue of lifting UN, EU and US sanctions that have choked Iran’s economy by strangling its oil exports and banks.

Abbas said Sunday that there must be a “precise framework” for lifting sanctions if Iran is to agree to any deal. The duration of the deal – the US wants at least 10 and possibly up to 15 years – is also a point of contention.

A European official said last week that a phased suspension – but not termination – of EU and US sanctions would be enough to offer Iran “huge relief” but that doing the same with UN sanctions was tricky.

“Ultimately, it´s time for the Iranians to send a clear signal to the international community about whether or not they´re willing to make the serious commitments required,” White House spokesman Josh Earnest told ABC television Sunday.

But for Israel and US President Barack Obama´s Republican opponents, the agreement will not go far enough to stop Iran one day getting the bomb.

Kerry is under pressure to return from Lausanne with something concrete to head off a push by Republican lawmakers to introduce yet more sanctions, potentially torpedoing the whole negotiating process.

“The dangerous accord which is being negotiated in Lausanne confirms our concerns and even worse,” Netanyahu said in remarks broadcast on public radio.

He said the “Iran-Lausanne-Yemen axis” was “dangerous for all of humanity” and that combined with Tehran’s regional influence, a nuclear deal could allow Iran to “conquer” the Middle East.

“I just don´t understand why we would sign an agreement with a group of people who in my opinion have no intention of keeping their word,” US House Speaker John Boehner, due to travel to Israel this week, told CNN.