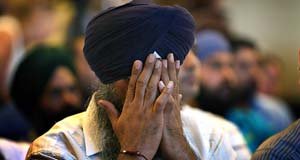 WASHINGTON, Dec 19 – An Indian-American Sikh man has been charged with providing material support to terrorist groups in India and Pakistan to intimidate the Indian government and to harm those not supporting their Sikh separatist cause.

Balwinder Singh, 39, of Reno, Nevada was charged in an indictment Wednesday with one count of conspiracy to murder, kidnap and maim persons in a foreign country, among other charges, the Las Vegas Review-Journal reported.

According to the indictment, Singh, known by several other names, is a member of two terrorist organizations, Babbar Khalsa International and Khalistan Zindabad Force, whose members aim to establish an independent Sikh state of Khalistan in part of India’s Punjab region.

Singh is not alleged to have committed any terrorist actions aimed at US citizens.

The indictment alleged that the object of the conspiracy was to advance the goals of the terrorist groups.

Singh was alleged to have used a false identity and obtained false identification documents in the US so that he could travel back to India without being apprehended by the Indian authorities.

It is alleged that Singh communicated with other co-conspirators by telephone while he was in the US to discuss acts of terrorism to be carried out in India.

Singh was alleged to have sent money from Reno to co-conspirators in India for the purchase of weapons that would be provided to members of the terrorist groups to support acts of terrorism in India.

The terrorist groups are known to target for assassination persons they consider traitors to the Sikh religion and government officials who they consider responsible for atrocities against the Sikhs, federal officials said.

In a press conference, Daniel Bogden, US attorney for Nevada, said: “Investigating and prosecuting matters of national security is the top priority of the US Department of Justice.”

“After an extensive investigation, the FBI-led Joint Terrorism Task Force of Northern Nevada has disrupted an individual’s involvement in facilitation activities in support of a foreign terrorist organization, targeting an ally of the United States,” said FBI Special Agent in Charge Laura Bucheit.

“We will continue to work with our international partners to prevent acts of terrorism on US soil or, as in this case, on that of an ally.”

Singh is a former citizen of India who fled to the US and claimed asylum. He eventually obtained a permanent residency card.

He is due for an initial court appearance Friday. IANS