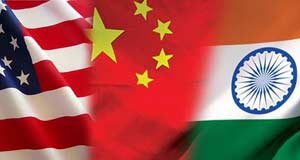 WASHINGTON, Dec 4 – While growing numbers of Americans believe that US global power and prestige are in decline, top foreign policy experts think China and India will be more important US allies in the future.

Even as support for US global engagement, already near a historic low, has fallen further, this reticence is not an expression of across-the-board isolationism, according to a new poll by Pew Research centre in partnership with the Council on Foreign Relations (CFR), a US think tank specialising in foreign policy.

“The public thinks that the nation does too much to solve world problems, and increasing percentages want the US to ‘mind its own business internationally’ and pay more attention to problems here at home,” the poll found.

Even as doubts grow about the United States’ geopolitical role, most Americans say the benefits from US participation in the global economy outweigh the risks. And support for closer trade and business ties with other nations stands at its highest point in more than a decade, the poll found.

The survey on “America’s Place in the World”, a quadrennial survey of foreign policy attitudes found that the public continues to express favourable opinions of a number of long-standing US allies.

While opinions about most of the 12 countries included in the survey have not changed a great deal in recent years, the balance of opinion toward India, Russia and Mexico has turned more negative.

The perception of India among some US foreign policy experts is more favourable.

For members of the CFR, a grouping of former diplomats, government officials and international relations specialists, China has been transformed from a major threat to the US to an increasingly important future ally.

More important, there is a growing belief among CFR members that China, along with India, will be more important US allies in the future, the poll found.

Majorities of the Council members surveyed said China (58 percent) and India (55 percent) will be more important US allies. Brazil is a distant third (37 percent).

And while more CFR members view China, India and Brazil as more important future allies than did so four years ago, substantially fewer say the same about Japan and Great Britain. IANS

Previous articleSaudi Arabia deported over 126,000 ‘illegals’ since Nov. 4
Next articleBob’s Banter: It Can’t Be Done