Eminent Historian Calls for Defending the Plural, Secular Fabric of the Country in a Lecture at Jamia Millia Islamia

NEW DELHI — Renowned historian Professor Mushirul Hassan believes that the very idea of India and its pluralism are under attack with the coming of Narendra Modi-led BJP Government at the center, . He howerver added that instead of losing heart, it is time to defend the plural, secular fabric of the country.

Prof Hassan was delivering a lecture at Jamia Millia Islamia on “Partners in Freedom: The Story of Jamia Millia Islamia” on Tuesday. He minced no words as he said, “I have no hesitation in saying that the ideas of pluralism are under attack with the new government in Delhi,” and continued that there is “serious trouble” and it needs to be recognized that there is an “attack on the very idea of India, its plurality, tolerance.” He added that we must defend the country not as Muslim or Hindu, but united as an Indian.

Professor Hassan had taken voluntary retirement last year, after his differences with the administration when he alleged harassment and humiliation. His arrival to the campus after almost 10 months was thus a sort of “home coming” and he acknowledged that he was happy to be back.

He spoke on the role of Jamia Millia Islamia in the freedom struggle which began in the wake of the Non-Cooperation – Khilafat Movement in 1920. The lecture was based on a Coffee Table book that he had co-authored with Rakshanda Jaleel in 2006.

Pointing that in 1920s two contradicting ideologies had become popular in the country – on one hand Mahatama Gandhi and his ideas of inclusive, harmonious society had become very popular as it had found support both among the educated elites and rural populace; but around same time there was also a rise of Muslim nationalism led by Mohammad Ali Jinnah and the Muslim League (and Hindu nationalism led by Hindu Maha Sabha).

Prof Hassan pointed out that as students of history we should not always judge an event but study and assesses it rather. He said that the Muslims of the period were faced with “enormous intellectual challenge between two contradicting ideologies,” and Jamia Millia Islamia, which would literally mean “National Muslim University”, was born in such a context.

Detailing the role of founders and patrons of Jamia, including Mohammad Ali Jauhar, Hakim Ajmal Khan, Hamid Ansari, Mohammad Mujeeb, Dr Zakir Hussain, among others and also the support extended by Mahatama Gandhi, he said, “Jamia has always stood for quintessentially nationalistic ideas” and they promoted the concept of “composite nationalism.” 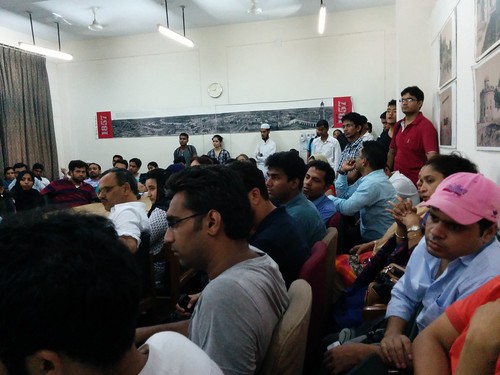 He said that many of the educationists and leaders associated with Jamia, including Dr Zakir Hussain, had come back after their education in Germany or other Western Universities had “anti-colonial” grooming.

These noble ideas were put in practice at Jamia and that was the chief contributions of the Institution. Chiding the current state of affairs at Jamia, he said, “These days people are turning ‘status-quoist’,” and no one in the campus remembers the victims of Gaza (or stand for such struggles),” he said, suggesting that the Jamia fraternity built their identity and earned their repute because of their nationalistic and inclusive ideologies.

He, however, cleared that with times things change and we need to keep rediscovering ourselves and in no ways he is suggesting to hold on to past, but said that as student of History he sees past as aspirations. Rizwan Qaiser, Head of the Department of History, who was chairing the session pointed that we go back to History only to look into future.

Later during the Question-Answer session, the issue of nomenclature of Jamia as well as its negligence came to which he cited interesting anecdotes, like how first Education Minister Maulana Abdul Kalam Azad and Dr Zakir Hussain did not get along well, how Mohammad Mujeeb did not think that Jamia should really expand, and though that “libraries would be useless as books would be eaten by termite while often researchers copy and submit their thesis.”

Prof Hassan said that in early days there were suggestion of keeping name in English for practical purposes as “National Muslim University” as it was used in several letter heads used in past, but even Gandhijee liked the Arabic name and had even threatened that he will end all relations with the Institution if the name is changed, and that in many ways, said Prof Hassan jokingly, “sealed the fate of Jamia.”

He also said that Jamia was always inclusive and incorporated pupils from all walks of life, irrespective of class, creed or religion. Prof Hassan had opposed the statutory minority status of Jamia.

After his long association with Jamia, where he joined as a lecturer, he soon became one of the youngest Professor of History in the country and later served as the Head of the Department, Dean of the Faculty of Humanities, Pro-Vice Chancellor and subsequently as the Vice Chancellor.

However, due to his ‘liberal’ views and for strong political positions, he was often drawn into controversies whether it was supporting the right to free speech of Salman Rushdie, his opposition to the statutory minority status of the University or his strong stand in the aftermath of the 2008 Batla House encounter, when he earned the respect within the campus for standing with the fraternity while was dubbed as anti-national by nationalistic jingoists. In 2013, he alleged humiliation by then Administration and had taken voluntary retirement.

Prof Hassan is the author and editor of over 15 books on freedom struggle, Muslims and other contemporary issues and regularly contributed articles to various newspapers and journals. He has also served as the Director General of India Archive and is currently Jawaharlal Nehru Fellow. In 2007, he was awarded the Padma Shri by the Government of India and the Ordre des Palmes Académiques by the French Government in 2010.

Jamiat Provides Shelter to People Displaced by 2019 Floods in Karnataka

UP Muslims Also Seek Caste Census for Their Backward Sections

Muslim Mechanic Lynched in UP’s Shamli: His Head Was Smashed on Road