NEW DELHI — A former Indian Navy chief has written an open letter to Prime Minister Narendra Modi and President Pranab Mukherjee saying he was “forced to hang my head in shame” over the attacks on minorities and Dalits under the rule of the current government, reported ABP Live TV reported.

Admiral L. Ramdas has regretted that those at the “helm of affairs in the country” have not condemned the assaults unambiguously and, if anything, downplayed their “serious and vicious nature” by “terming them ‘sad’ and ‘unfortunate’”.

“That there are MPs, cabinet ministers and elected chief ministers who are in the forefront of these comments and actions leads one to believe that the ruling party and its satellite organisations are working to a plan and with utter contempt for the rule of law and all norms of decency,” the letter says.

Ramdas, who headed the navy between 1990 and 1993 and has won a Magsaysay award for peace, has urged Modi and Mukherjee to “stem the rot” and take steps to restore people’s faith in democracy before it is too late.

The octogenarian, who joined the military aged 15, has described the forces as an “exemplar of India’s secular ethos” because in “ships and submarines, or in planes and battle formations, we do not discriminate on the basis of caste or religion – we train, we fight, we live, we eat and we die together”. 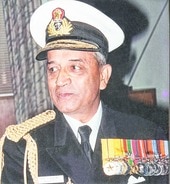 Today, as a veteran in my eighties, I am forced to hang my head in shame as I witness a series of incidents and assaults on our fellow citizens, especially minorities and Dalits,” his letter says.

He says he believes the recent occurrences were rooted in the Rashtriya Swayamsevak Sangh’s notion of “creating a Hindu ‘rashtra’… which is disturbing to say the least”.

“This in turn has resulted in a dangerous pattern of mob behaviour including intimidating and lynching people merely on the basis of rumours.”

India, Ramdas has emphasised, represents a “unique blend of peoples and cultures which have evolved over 5,000 years in a constantly changing and dynamic process”.

India’s distinctiveness and diversity could probably never be replicated anywhere else and, therefore, the concept of a “single religious identity or a mono culture” is an “insult to this ancient civilisation”.

The letter, dated October 22, to which Ramdas pointedly added “”, was released to the media today.

Ramdas has emphasised how certain communities are being “singled out for special attention”.

“Today, a Muslim has to prove his or her loyalty, and they are being repeatedly put in a situation where their places of worship are under attack, as indeed their eating habits, and other basic freedoms.”

Ramdas says the failure of the Prime Minister and his colleagues to denounce the violence and intimidation is a “serious” matter that does not “augur well either for national security or national integrity”. He has reminded them of their oath to uphold the Constitution.