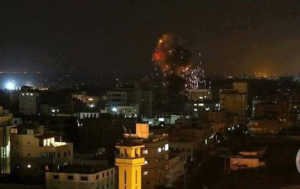 BETHLEHEM (Ma’an) — The Israeli air force launched at least two airstrikes on the besieged Gaza Strip early Tuesday, with the Israeli army saying the attacks targeted two Hamas militarily infrastructures and were in response to a rocket fired from Gaza late Monday, which allegedly landed in an open area in Israel’s Shaar Hanegev Regional Council that borders northeastern Gaza, causing no injuries or damages.

No injuries were reported as a result of the airstrikes, which hit both Gaza City and Rafah.

“Since the terror organization Hamas is the ruler of the Gaza Strip, it is responsible for any attempt to harm the State of Israel,” the Israeli army said in a statement following the aerial attack.

However, in a statement, the Hamas movement accused Israel of fabricating claims of rocket fire to justify the attack. “The Israeli claim of a rocket being fired from Gaza and issuing a statement on behalf of ISIS to justify the escalation and an attack of resistance positions are part of a dangerous and transparent Israeli game.”

The statement referred to reports in Israeli media that claimed a Salafist group in Gaza affiliated to the so-called Islamic State claimed responsibility for the alleged rocket fire.

Hamas has not claimed responsibility for any rocket attacks since a ceasefire was declared after the 2014 war, and the movement has attempted to clamp down on armed activity by smaller political groups that do launch rockets from the territory.

Israeli officials have nonetheless accused Hamas of “preparing” for another war with Israel and have threatened retaliatory measures against the Gaza Strip as a whole.

The attacks came as Palestinians in the besieged coastal enclave are being forced to cope with just a few hours of electricity a day since Israel agreed to a Palestinian Authority request to dramatically cut electricity supplies to territory.

The Gaza Strip marked the ten-year anniversary of Israel’s siege of the small Palestinian enclave this month, with the humanitarian situation there continuing to alarm rights groups that have denounced the Gaza’s inhuman conditions as “unparalleled in the modern world.”