General in His Labyrinth or Fiddler on the Roof? 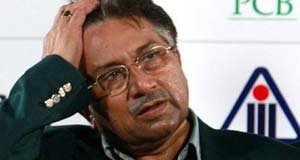 One doesn’t know who hates Musharraf more. PM Nawaz Sharif, whose government once the former Army chief toppled, or Chief Justice Iftikhar Chaudhry, who was sacked as chief justice by Musharraf

The army chief is expected to retire on November 29, but according to some keen observers, the quiet, chain-smoking general may remain involved in the security regime (actively or behind the scene) which he has been part of post 9/11 and since Musharraf days.

The Peoples Party lawyer who stood by the Chief Justice as the latter threw the gauntlet at the military ruler when emergency was proclaimed, also suggested there should be an open trial of the former president for high reason, saying that Musharraf suspended the Constitution to impose state of emergency in 2007.

While some questions have been raised on why the Government constituted the bench instead of the Chief Justice doing it, some have questioned the timing of the trial. The government spokesman said, “had the government not moved the court, Musharraf would have fled from the country:

“Since Musharraf has been released on bail in all four cases, we could not have been able to resist his plea to remove his name from the Exit Control List. So the government decided to move with his trial (for high treason),” the minister told reporters at a seminar last week. So was the idea just to keep the former army chief from not exiting? Not so.

To a question, the Nawaz government spokesman clarified by saying that initially it was a perception that Musharraf would not be arrested, but the government arrested him. He said rumors were also floating in the air that the general would not be put under trial. Therefore, the government proved all wrong and wrote a letter to the chief justice of Pakistan to form a commission, adding that had the government not written the letter to the Chief Justice, Musharraf might have left the country and people would have started blaming it for his escape.

Chaudhry Nisar said there was no personal grudge against Musharraf in initiating his trial. He said Prime Minister Nawaz Sharif had announced even before assuming the office that he had forgiven Musharraf  for all the personal troubles the latter had caused to him.

Coincidentally, both at the helm of affairs (Nawaz and the Chief Justice) of the executive and the judiciary have had personal issues with the military ruler. Some may argue it was the other way around.

So one doesn’t know who hates Musharraf more. Nawaz Sharif, whose government the army chief toppled, or Chief Justice Iftikhar Chaudhry, who was sacked as chief justice by Musharraf.

“But Musharraf does not seem as worried as he should be. Much of his time is spent playing cards and having cocktails with his friends, many of whom are ex-army officers themselves. And there is a lot of discussion on how to plan the next move,” wrote Imtiaz Ahmed in his column in Hindustan Times today.

“Musharraf may have been deserted by his old political allies, many of whom are now allies with the present government, but most of his army colleagues stand by him even today.  This includes former course mates and generals who served under him when he was military strongman of Pakistan.”

“One such serviceman who visited the General recently said Musharraf is in high spirits. “All this talk of treason and hanging hasn’t affected Musharraf. All he wants is to be given freedom of movement.”

He said the “treason case would not be concluded so soon since prosecutors have enough evidences against Musharraf” which the defendant and his lawyers will put to intense scrutiny and cross-examinations.

Not really thinks Aitzaz. According to him, the former president used “I, I and I” several times in his speech while imposing emergency and suspended constitution of the country, adding that this “I” of Musharraf could become strong evidence against him.

But there is a lot of murkiness, writes Imtiaz in his HT column. “For one, Ahmed Raza Kasuri, Musharraf’s lawyer in the cases instituted against him earlier, says that it is not only Musharraf who should be tried. “We will need to bring to trial all the corps commanders and officers who planned and executed the coup. This cannot happen.”

“For starters, one of those who participated in the coup is currently in the running for army chief. The government, however, insists that only Musharraf will be tried. This itself has been challenged.

The other issue is personal. One doesn’t know who hates Musharraf more. Nawaz Sharif, whose government the army chief toppled, or Chief Justice Iftikhar Chaudhry, who was sacked as chief justice by Musharraf.

“It is interesting,” says lawyer Jaffar Ahmed, “that the case against Musharraf has been framed for 2007 and not 1999 when he took power from Sharif. That is because the present chief justice took oath under the military government then and can be seen as an accomplice in that sense.”

Lawyers insist that Chaudhry wants to settle scores with Musharraf before the chief justice retires in December. “He wants to close all open chapters so that he himself is not brought to trial after he retires.”

Musharraf is aware that all those bringing him to trial are themselves culpable in many ways. That is possibly why he has retained the services of Pakistan’s most high-profile lawyer Sharifuddin Pirzada, who has been the architect behind legislation that gave legitimacy to successive military governments.

Termed the “Jadoogar of Jeddah” because of his stint with the Organization of Islamic Cooperation, Pirzada has been the brain behind the PCO – the Provisional Constitutional Order that legitimized the Musharraf government and under which judges like Iftikhar Chaudhry took oath to continue in their positions.

AND WHEREAS the situation has been reviewed in meetings with the prime minister, governors of all four provinces, and with Chairman of Joint Chiefs of Staff Committee, Chiefs of the Armed Forces, Vice-Chief of Army Staff and Corps Commanders of the Pakistan Army; NOW, THEREFORE, in pursuance of the deliberations and decisions of the said meetings, I, General Pervez Musharraf, Chief of the Army Staff, proclaim Emergency throughout Pakistan.

I, hereby, order and proclaim that the Constitution of the Islamic Republic of Pakistan shall remain in abeyance.

PML-Z leader Ejaz ul Haq who is well known for his links in the deep state being the son of military ruler Gen Zia, said in a talk show last week, “But we will have to think whether we are heading towards confrontation with any state institution,” adding that that the matter would be raised during the trial that why N government did not file a case for Oct 12 actions.

So far, the khakis have stayed away from the proceedings. But it has been keen to keep its former chief safe owing to threats from the Tehreek-e-Taliban Pakistan (TTP).

The personal security of Musharraf has been in the hands of army commandos and any attempts by the civilian government to hound the former army chief are seen with alarm in army circles.

“When the court sentenced Musharraf to jail, the army intervened to have his house declared as a sub-jail. They would not let their former chief be taken to a civilian facility,” recalls one officer.

Even then, the trial has caused much debate in Pakistan. Interior minister Chaudhry Nisar said, “The decision to proceed was taken in the national interest.”

The question that many ask is what constitutes ‘national interest’.

Meanwhile, the former president has decided to challenge the special court, set up to initiate high treason trial against him in the Supreme Court, Geo News reported.

According to reports, Sharifuddin Pirzada and Ibrahim Satti met Pervez Musharraf at his farmhouse in Chak Shahzad in this regard. They would submit their power of attorney in the apex court to challenge the matter.

So in the coming days and months the nation will find out whether Musharraf is in his labyrinth or is a fiddler on the roof.  Interior minister Chaudhry Nisar said, “such a situation is happening for the first time in Pakistan’s history.”

Irshad Salim is Editor and Publisher of New York-based DesPardes.com and PKonweb.com and a political and cultural analyst. Presently, he is stationed in Riyadh, Saudi Arabia on a management consultancy assignment.

Previous articleThousands of Anti-drone Protesters Block NATO Supply Line in Pakistan
Next articleAn Open War Between US, Israel Over Iran