Pilot and His MLAs Move Rajasthan HC Against Disqualification Notices

Nazir Hussain, the veteran actor of Hindi cinema with more than 400 films under his belt, began his professional journey with the British Army and then inspired by Subhash Chandra Bose worked in the Indian National Army

[dropcap]N[/dropcap]azir Hussain, the famous character artist was born on May 15, 1922 in the village of Usia in Uttar Pradesh’s Ghazipur district. Hussain, now long forgotten, acted in more than 400 movies and is considered as the Pitamah of Bhojpuri cinema. Much before it became fashionable and productive, Hussain was instrumental in the making of first Bhojpuri film ‘Ganga Maiya Tohe Piyari Chadhaibo’ produced by B P Shahabadi. The success of Bhojpuri films in the last few years led to talks of his contribution to Bhojpuri cinema. However, not many know that he was in Subash Chandra Bose’s Indian National Army (INA), which became the reason for his entry into Bollywood.

Nazir Hussain’s father Shahabzad Khan was a guard in the Railways and Hussain grew up in Lucknow. He worked in the British army for a short time but came under the influence of Subhas Chandra Bose and joined the Indian National Army (INA). I asked scholar Sugata Bose about Nazir Hussain and he replied: “Yes, Nazir Hussain was in the INA. He joined with Bimal Roy to make the film ‘Pahela Aadmi’ based on the INA experience.” I have not been able to find out his exact role but he seems to have faced imprisonment and was released after Independence. He was accorded the status of freedom fighter and was given free railway pass for life.

In those days Bimal Roy was planning a film on Bose and the INA. To give it an authentic touch he was scouting for INA members to help him. Nazir Hussain’s personality and impressive voice perhaps helped Bimal Roy to notice him. However, Hussain was reluctant to work in films as he had no such background. After much persuasion and cajoling from friends and colleagues he relented. ‘Pehla Aadmi’ released in 1950 launched him to stardom and he became a permanent fixture in Bimal Roy’s movies.

He excelled as a character artist and starred in several blockbuster movies. He became famous for his emotional scenes and is best remembered for his roles in Amar Akbar Anthony, Charas, Jewel Thief, Parakh, Devdas, Leader, Ram Aur Shyam, Kashmir Ki Kali and many others. While Hussain was busy in the Bombay film industry a meeting with President Rajendra Prasad changed the course of his life. At an awards function, Hussain was introduced to Prasad and after knowing that he hailed from Ghazipur started speaking in Bhojpuri.

Prasad told Hussain to consider making Bhojpuri films which resulted in the super hit ‘Ganga Maiya Tohe Piyari Chadhaibo’. Hussain wrote the script for the movie that became a raging hit. The songs were super hit and Hussain himself went on to produce and direct several Bhojpuri films in the 60s and 70s. One of his films Balam Pardesia is considered a landmark in the Bhojpuri film industry. Unlike the Bhojpuri films of today, the films made by Nazir Hussain (and others) revolved around social issues. They tackled the problems of dowry and landless farmers, highlighting the wickedness of cruel zamindars and capitalists.

My personal favourite is his role as a rickshaw puller who trains Balraj Sahni in Bimal Roy’s Do Bigha Zameen. Despite his broad shoulders and good physique, he excelled in roles as heroine’s father or poor, helpless farmer/worker. Any film he starred had to have a crying scene. No doubt he was dubbed ‘Aansuon Ka Kanastar’ in the film industry. In real life too he was an emotional person. He used to don silky suits and Indian clothes with equal elan in movies. However, whenever he used to visit his native village he prefered dhoti-kurta. People would come from far-off places in huge numbers to see and meet him at his small village in Ghazipur. 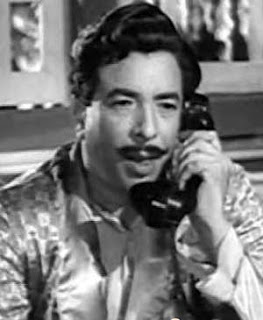 Hussain shot several of his films at his ancestral village and put Ghazipur on the film industry map. After Nazir Hussain, Ghazipur gave several film personalities like Rahi Masoom Raza, Anjan Shrivastava and Yunus Parvez. The veteran actress Leela Mishra too was from Ghazipur and starred along with Nazir Hussain in ‘Ganga Maiya Tohe Piyari Chadhaibo’.

“I have met Nazir cha in Bombay and he told me that he had been in the INA and became very emotional thinking of my parents,” activist Subhashini Ali, daughter of Colonel Prem Kumar and Captain Lakshmi Sehgal told me few months back. I remember meeting actor Raj Babbar in Mumbai for a report and when I told him I am from Ghazipur his immediate remark was: “Nazir Hussain too was from Ghazipur.”

Danish Khan is a London based writer and journalist. He also runs  www.urdufigures.blogspot.co.uk and is doing his Ph.D at Oxford University

Attractions of Old Delhi and Dichotomy of Nostalgia