Finsbury Park: Right-Wing Extremists Respond To Attack on Muslims by Urging UK to ‘Cast Islam Out Of Country’ 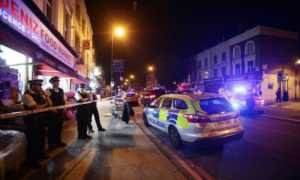 Right-wing extremists have responded to the Finsbury Park terror attack by urging UK citizens to “rise up and cast Islam out of their country.”

Extremists also sought to defend the attack, in which a van ploughed into Muslims after late-night Ramadan prayers, by claiming: “This is war … We have the right to fight back.”

The social media posts were shown to The Independent amid anxieties that the British authorities are “way behind” the increasingly sophisticated tactics used by right wing extremists to radicalise followers online.

Tell Mama, the anti-hate and Islamophobia group said that extremists are now covering their tracks by using untraceable mobile phones and (Virtual Private Network) VPN services that conceal their computer’s location – leaving the police unable to find them.

They have also used less regulated social networks like the Russian-based VKontakte (VK) service to build up “spider’s web” networks of like-minded individuals who then support and radicalise each other.

It is not clear what influence – if any – social media and online radicalisation played in the Finsbury Park incident.

But it appears that the tactics highlighted by Tell Mama have already been used by British right-wingers to plot violence online.

In December 2016 one extremist, thought to have been based in the West Midlands, responded to the Berlin Christmas market truck attack of December 2016, by asking on VK: “t’s time for Europe to act these vile creatures need flushing out of our homelands into the sea!  Looking to join a group who is active in fighting Islamic invaders in Europe! I’m UK based but will travel to Paris and Germany, drop me a message!”

Photographs posted on the extremist’s VK profile revealed him showing off his dagger, and posing in balaclava with the blade strapped to his belt.  He also showed himself giving a Nazi salute.

Tell Mama passed his post to the counter-terrorism police, but Fiyaz Mughal, founder of Tell Mama, said that more generally: “There is a problem.  The British authorities are way behind.

“The Home Office has its own extremism analysis unit, but it doesn’t act on some of the information.  It doesn’t see the extremism element as something it needs to work robustly on.

“We are not fully using all legal means to challenge the extremists’ narrative.  Initiatives to create a counter-narrative are stalled.  Right now, the British Government is fumbling.” Meanwhile, he said, right-wing extremists were able to operate like a mirror image of Isis.

“They are doing exactly what Daesh [Isis] are doing,” said Mr Mughal.  “They are preying on people who are vulnerable, who may have some sort of crisis in their lives.

“They are throwing out a net and seeing which fish they catch.  Sadly, their assumption is that out of a population of 60 million people, someone will do something on the back of the information they put out.”

The extremists behind some websites, he said, might be careful to avoid directly calling for violence, but they aimed to produce “the inference of violence”.

Tell Mama showed The Independent screengrabs of a Facebook paged linked to British far-right supporters which on Monday evening hosted an online discussion of the Finsbury Park attack.

One user, who appeared to be based outside the UK, praised the man suspected of carrying out the attack.

“Good for him,” he wrote.  “Muslims are killing them left and right over there, and their own government won’t help them.

“It is time for the citizens to rise up and cast them out of their country.”

Elsewhere on social media, extremists sought to justify the Finsbury Park attack while stopping short of calling for violence.

A British user of the American white supremacist site Stormfront described the attack as “A protest against these disgusting pigs”.

Another British poster wrote on a Stormfront forum: “If the police refuse to protect Britons, then you can expect more people to take the law into their own hands and do it for ourselves and they would be entirely within their rights to do just that.”

The far-right group Britain First posted on its Facebook page that “Finsbury Park Mosque was notorious as a haven for Islamist terrorists and extremists!”  It added a video from a documentary about the extremist preacher Abu Hamza, despite him having had nothing to do with the mosque since his arrest for terrorism offences in 2004.

The mosque has in fact now won national awards for its community work, but the post drew comments that included “Demolish all the fxcking mosques,” and “20 injured 1 dead! Wish it was the other way around!”

Mr Mughal also said that some of the most disturbing online activities of the far-right were becoming harder to trace.

He explained that extremists were making direct contact with each other via the comments sections of websites or via twitter, and then messaging each other privately to “build a spider’s web of other like-minded people.”

Such private online activity was less immediately visible than that of known far-right groups or parties.

“They connect with each other with no formalised structure,” said Mr Mughal.  “They may not have been on marches.  They are not part of any formalised street demonstration structure.”

Mr Mughal said some extremists might set up their own websites and were growing increasingly sophisticated in how they covered their tracks.

“These people have now become very tech-savvy,” he said.  “They use VPN to block their computer’s IP address or to give it a false location.  They mask their phones by using sim cards that have no registration attached to it.

“They have gone untraceable.  We have had numerous cases where the police have come back to us and said ‘We can’t do anything about this because we can’t trace these guys’.”

He added that extremists were also becoming harder to trace because they were now swapping tips on line.

“They are creating their own online manuals of how to bypass being identified.  They are saying this is a server that won’t have an ID check.  Here’s where I brought my sim from …”

Right-wing extremists, he suggested, were now all the more dangerous because they were no longer simply the street thugs of old:

“They are much cleverer now in how they are doing these activities.  They are extremely sophisticated.”